In the previous articles in this series (Part 1, Part 2, Part 3, Part 4, Part 5, Part 6), we have explored the concept of the adjustment of HPLC methods. In particular, we have tried to determine the difference between method adjustment and method change. The reason for this splitting of hairs is the interpretation of regulatory guidelines that adjustments can be made to meet system suitability requirements, but changes will require some level of revalidation. As a reference point, we used the European Pharmacopoeia (EP) and United States Pharmacopoeia (USP) recommendations. The problem with any discussion of method alteration is that there is a lot of interpretation that goes on.

As a timely way to highlight this dilemma, I received an email recently from a reader, signed “HPLC Chemist at Heart.” She wanted to share her story, but didn’t want to be identified, either individually or corporately. I’ll honor her wishes, but her story is one worth sharing.

Background
The HPLC method was one taken directly out of the USP. The conditions were fairly simple – it was a reversed-phase, isocratic method with UV detection. According to company standard operating procedures (SOPs), the method was validated for a finished pharmaceutical product, both as a stability-indicating method and for assay of content.

Several years later, as long-term stability protocols were about to be completed, it was noticed that there was a minor peak that eluted too close for comfort relative to the active pharmaceutical ingredient (API). Even though the system suitability still passed and measurement of peak purity with a diode-array detector still showed that the API peak was pure, the analyst felt that some adjustment of the method was necessary so that better data quality could be attained. The adjustment was quite simple – the flow rate was changed. With the new flow rate, which was within the USP guidelines of ±50% discussed earlier (Part 4), the system suitability test passed, including peak purity by diode array. Because the change was minor, was within the guidelines, and system suitability passed, it was felt that, other than proper documentation, no additional validation was required. 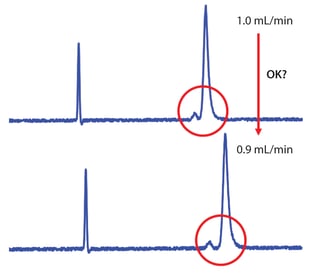 Enter the Auditors
Last year, the laboratory was visited by FDA auditors. In the review of the lab’s data, the FDA indicated that all the method parameter changes must be validated. They went on to say that this applied to submitted products (NDA – new drug application and ANDA – amended new drug application) as well as over-the-counter (OTC) products. The laboratory countered by showing the auditors the USP guidelines and that the adjustment they made met the guidelines in terms of being within the range as well as passing system suitability. Their defense was in vain – the regulators prevailed. Arghhhh (followed by sound of forehead thumping against the wall…)!

The Learning
What can we learn from all of this? In a way, I can understand the auditors’ position. When a method is developed, good scientific practice tells us that we should investigate the effect of each operating variable on the final method. This often is referred to as Quality by Design (QbD), which states that quality should be designed into a method. I suspect that the original method that was submitted as a USP monograph had some level of testing along these lines. But it probably got dropped in the final method. With today’s regulatory environment, it is best to include acceptable ranges for each variable in a method.

But that’s not the history of the present method, and the USP guidelines are fairly clear on this. I would have taken the same approach as the lab did. A change in flow rate for an isocratic method is a very minor change, and they did show that system suitability passed. Interpretation of regulatory guidelines is not simple. As this example shows, everyone looks at the same statements a little differently. To compound the issue, if you look at one of the FDA’s own laboratory procedures1, they restate the USP guidelines. If it is good enough for the FDA, it should be good enough for me, right? Well, maybe or maybe not.

This issue is still not resolved, and can be summarized effectively by our friend HPLC Chemist at Heart’s concluding statement in her email, “In this instance, these particular FDA auditors did not have a problem with the USP guidelines, only that the method validation must encompass the entire range used for each parameter in the method. I suspect that the industry and FDA will reach a happy median with respect to the new guidelines; but, it will take many a citation and joint FDA-Industry conferences before the true line in the sand is determined.”