The capillary electrophoresis (CE)techniques have been around since the 1980s, and commercial instruments available since the end of that decade. So why would we start on such a topic now? There are several indications for a growing interest in the CE techniques. Instrument sales are increasing. An important driving force is the biopharmaceutical industry, where the capillary format replaces the slab gel.

This process has been driven by several biotech products coming off patent, with CE methods in their pharmacopoeial monographs. Also, more and more commercial application kits have become available. Many determinations are now available as ready-made solutions. For successful implementation, well-trained personnel both on theory and practice are a must. This series aims to be a low-threshold, practical and pragmatic aid for that implementation process by focusing on good CE working practices and troubleshooting.

OK, so the world is more mature now for the successful application of CE. Why would one choose CE to start with; can’t we solve all our problems with (UHP)LC and GC? 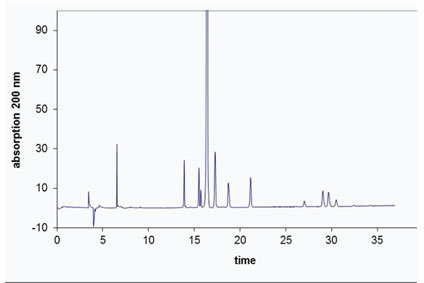 CE can be seen as an automated, analytical version of the conventional electrophoresis techniques. The main advantages of doing electrophoresis in a capillary are magnificent efficiencies and automation. Because of the small diameters of the capillary, typically in the 20–100 µm inner diameter range, the Joule heat dissipation is very efficient. This means that high voltages, usually up to 30000 V, can be applied. That in its turn, results in fast separations with very little band broadening. Small bands means efficient peaks with high plate numbers.

Because the capillary is usually made from fused silica, on-column UV detection is easily achievable. This means that the time-consuming staining and destaining known from slab gel electrophoresis is no longer needed. The combination of a small inner diameter (ID) capillary and on-column UV detection means that automated equipment has been developed. And with peaks instead of bands, quantitation is no longer an issue.

The capillary format creates an electrophoresis technique that is applicable over a wide range of analytes. Anything from small anions and cations to chiral separations, large proteins, DNA, cell organelles and even complete cells and viruses have been analysed with CE.

The small scale of CE makes it a very green technique. A 50 cm long 50 µm ID capillary has a volume of 1 µL. Only a few nanoliters are injected. On top of that, most of the time the separation medium is aqueous meaning that the consumption of chemicals is very low.

Electrophoresis is a fundamentally different separation technique than chromatography. Chromatographic separations are based on partition differences of the analytes between the stationary and mobile phases. Electrophoresis is based on differences in migration of charged particles in an electric field. This means that chromatography and electrophoresis are complementary tools in the analytical chemist’s toolbox. Of course there are separation problems that can be solved with both techniques. But even so there are problems where one technique proves superior. The art of good analytical science is to use the correct tool for analytical challenge at hand. 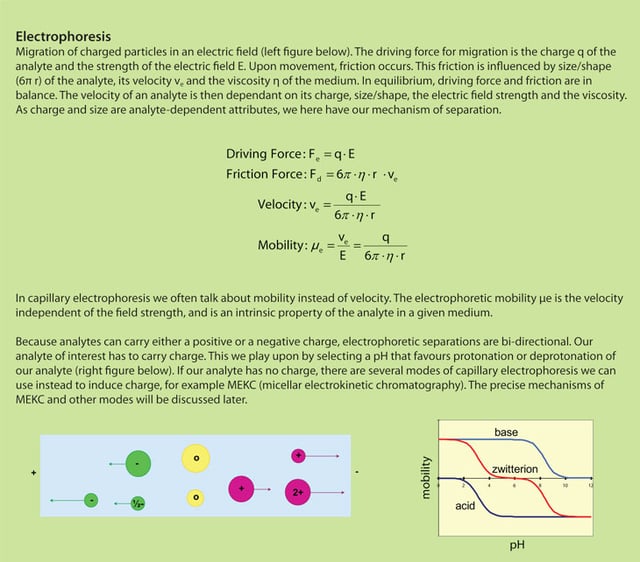