The importance of particle pore diameter for biomacromolecule separations

Recently, the evolution of middle to large biomacromolecules such as peptides or proteins is apparent in the market of pharmaceutical drugs in addition to traditional active ingredients based on small molecules. The use of peptides for clinical purposes has its origins in the 1920s using insulin and penicillin. In the 1960s, oxytocin and vasopressin were added to the clinician’s arsenal. Leuprorelin and octreotide rounded out the first 60 years of peptide-based drugs by being introduced to the clinic in the 1980s.

In the 1980s, the average length of therapeutic peptides was nine amino acids long with molecular weights of less than 5 kDa. But in the 1990’s, longer peptides containing 15–20 amino acids became common, and, by the turn of the century, proteins with 40 to 50 amino acid residues with molecular weights approaching or exceeding 50 kDa were beginning to emerge en masse from biopharmaceutical companies. In 2019, even larger proteins have taken the market by storm in the form of monoclonal antibodies (mAbs), antibody-drug conjugates (ADCs), and bispecific antibodies (bsAbs), to name just a few. 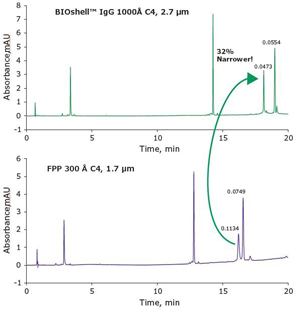 A mAb is composed of two light chains (LC) that are tethered to two heavy chains (HC) through disulfide bonds. In addition, since the LC and HC are composed of amino acids with reactive side chains, IgGs can be post-translationally modified through phosphorylation, methylation, oxidation, and nitrosylation, among other modifications. These modifications may change the binding affinity of the mAb so that it binds either the wrong antigen, does not bind any antigen, or associates with the wrong cell surface receptor. In addition, mAbs can also aggregate which can lead to allergic responses in patients. Biopharmaceutical companies need to develop rigorous methods to assess lot-to-lot reproducibility of their candidate biologic drug, and the above-mentioned modifications are known as Critical Quality Attributes (CQAs) that both the Food and Drug Administration (FDA) and the European Medicines Agency (EMA) monitor. Due to these stringent requirements from regulatory bodies, much research has been pursued in the past 20 years to develop accurate, robust, and high-throughput methods to assess biopharmaceutical purity and structure.

High performance liquid chromatography (HPLC) has been used extensively in the past several decades to characterize peptides and proteins. Since the advent of ultrahigh performance liquid chromatography mass spectrometry (UHPLC-MS) in the mid-2000s, there has been much research in both developing new methods to characterize large biomolecules and in developing new column technology to better resolve all the different molecular entities that are present in a heterogeneous mAb therapeutic. Two main types of particle morphology are prevalent in the industry today: fully porous particles (FPPs) and superficially porous particles (SPPs, also called Fused-Core® or core shell particles). To take advantage of the low dispersion of UHPLC instrumentation, columns with sub-2 μm FPPs with pore sizes of 300 Å have been used for the analysis of larger hydrodynamic radii biomacromolecules. These columns have been the industry standard since the mid 2000s. However, these columns suffer limitations when analysing larger or more complex proteins like mAbs and antibody-drug conjugates (ADCs). The relatively small pore size, in addition to a totally porous architecture, and overall higher surface area, restricts the free diffusion of large molecules through the particle and may cause irreversible adsorption of the protein to the stationary phase. This architecture concomitantly results in an increase in the mass transfer term and longitudinal diffusion term of the Van Deemter equation, leading to peak tailing, loss of resolution, and low recovery.

Since 2017, a new line of 1000 Å columns have been introduced that have been optimized for mAb and ADC characterization. These columns are packed with 2.7 μm SPPs that are composed of a 0.5 μm shell thickness and a 1.7 μm solid silica core. The 1000 Å pore particle permits the analysis of mAbs, ADCs, and other, much larger, biomacromolecules. Advantages over columns packed with FPPs are numerous: the SPP shows a significant advantage in mass transfer, leading to less band spreading; columns packed with SPPs are more uniformly packed than columns composed of FPPs, leading to a lower eddy dispersion (A term in the Van Deemter equation); and larger particle sized SPPs have efficiencies similar to or better than sub-2 μm FPPs, leading to the ability of the analyst to run at higher flow rates with less risk of on-column frictional heating due to elevated column backpressure. Finally, the B-term (longitudinal diffusion) of the Van Deemter equation is also minimized with SPPs. This is due to the presence of less dead volume in the column. A column packed with FPPs will occupy only 33% of the column volume whereas a column packed with SPPs will occupy approximately 41% of the column volume.

This article will further detail the reasons on why wide-pore diameters are necessary for separating biomacromolecules. Applications involving biomolecules will clearly demonstrate that pore diameters of 450 Å or less can lead to poor results and inadequate resolution of biomolecule variants.