The high voltage, typically up to 30 kV, means that the separation becomes very fast and efficient and gives high plate numbers. In this article we will focus on the capillary as used for CE. We will look at the typical choices of length and diameter for method development. We will also look at coated capillaries and discuss both permanent coatings and adsorbed coatings.

What is a capillary?
A capillary is a thin tube and for CE we typically use fused silica capillaries. Mostly used inner diameters are 50 µm and 75 µm. Common capillary lengths for a CE separation are 30 – 60 cm. For CE-MS, you normally need a longer capillary of around 1 m in order to be able to make the connection of the CE to the MS. On the outside the capillary is covered with a protective coating, usually polyimide. On the inside, you can also use coatings, so it is important to distinguish between them. When we talk about coated capillaries we are not talking about this outer coating, but about the an additional coating that is added on the inside of the capillary to enhance separation. 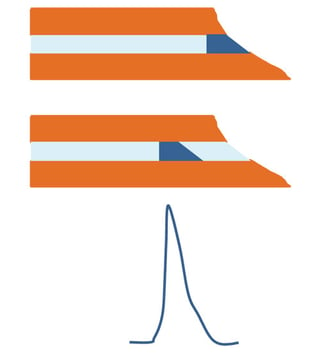 Figure 1: Injection artefacts caused by a badly cut capillary. If the capillary cut is not straight, this will lead to injection artefacts. In this case, the sample is not injected as a neat zone. Consequently, a tailed peak will result.

Detection window
Fused silica meets most of the requirements one can have for a capillary. It is a rather inert material, inexpensive and easy to handle. As fused silica is transparent for UV light, it is possible to use UV-VIS detection by looking straight through the capillary. Of course you then have to remove the protecting coating on the outside of the capillary. The easiest way to remove the polyimide coating is to burn off the coating with a ordinary cigarette lighter or, in a more sophisticated manner, with a specially designed window burner.

Figure 2: Some solvents cause swelling of the polyimide coating. These impressive and demonstrative pictures come from a publication of F Baeuml and T Welsch, J. Chromatogr. A 961 (2002) 35–44. It shows what happens if the fused silica capillary end with the polyimide coating on the outside is immersed in solvent. In methanol the polyimide swells a little. In acetonitrile it swells substantially. So much so in the latter the proper end of the capillary is no longer visible, as the polyimide sticks out like a too long sleeve.

Capillary ends
The capillary can be cut to the desired length with a ceramic cutter or with a special capillary cutting device containing a diamond. It is important that the cut is straight to avoid extra band broadening. To get a straight cut, make a small cut or flaw in the capillary with the ceramic cutter without applying too much pressure. Do not bend the capillary while cutting. After making the flaw, a little bending is sufficient for cleaving the capillary. So, it is actually quite similar as cutting a window-pane. Check with a magnifying glass or under the microscope. Even the outlet of the capillary should be straight. If not, or if broken, this might affect your separation (e.g., Figure 1). There are examples where a broken outlet resulted in sloping baselines or tailing peaks. Do not saw with the cutter. Sawing gives a rough cut and debris might end up in the capillary, disturbing your analysis.

Capillary length
In selecting the appropriate capillary length for your application, there are a few things to consider. Fundamentally, the resolution in a CZE separation is independently of the capillary length. Short capillaries give fast separations and high field strengths can be applied. For that reason you can find several examples in literature where people use the so called ‘short-end injection’. This is done as follows. The common CE equipment is restricted to minimum capillary lengths of around 30 cm total length. In effect that means 20–24 cm effective separation length to the detector and 8–11 cm from the detector to the outlet. In order to use a shorter capillary, you can inject on the outlet end and reverse the applied voltage. The separation is then from outlet to detector, so over the short-end.

A longer capillary could give additional resolution, at the cost of a longer analysis time, if you use CE modes that make use of chromatographic interactions, such as MEKC or chiral separations. An additional advantage to a longer capillary is that you can inject more, a longer plug, before the injection plug length starts to contribute to the band broadening. 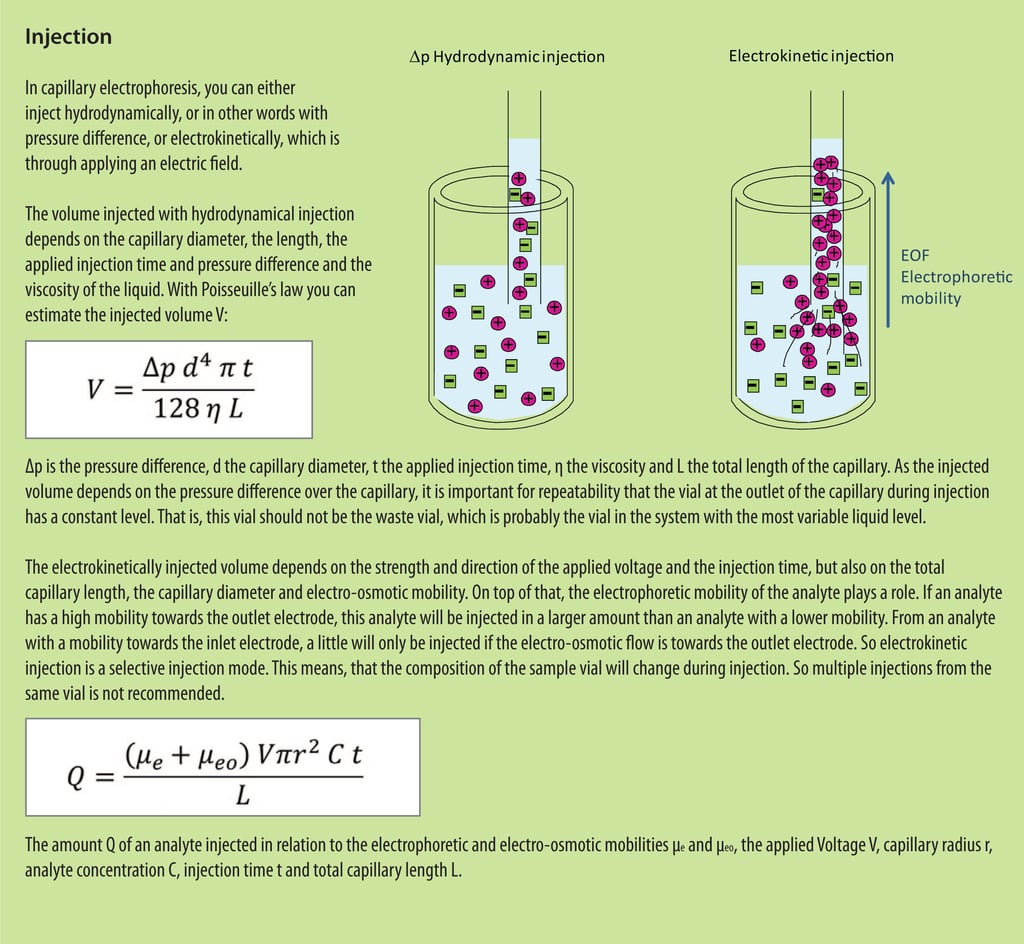 Capillary diameter
The smaller the capillary diameter, the more efficient the heat dissipation, so the higher the voltages that can be applied for fast and efficient separations. However, because detection is usually UV detection performed on-capillary, the capillary diameter is also the detection path length. Lambert-Beer’s law teaches us that for sensitive detection, you’d want longer detection path lengths, not shorter. So depending on the detection properties of your analytes and the required sensitivity of the application, you have to select the optimal diameter. You can check if the heat dissipation for the selected BGE is still sufficient or not by making an Ohm’s plot.