Once a chemical hit is found through a library screening process and verified, the synthetic route is then optimized. This step involves an iterative process of synthesis and reactivity measurements of the new compound(s) to further develop the drug candidate(s). Reactions may proceed along a course of minutes, hours or days.

During this process, chemists need to know as soon as possible if their syntheses are proceeding as desired. This means utilizing measurement capabilities, such as liquid or convergence chromatography, that require minimal sample preparation with a fast response. It is also necessary to detect low levels of the products, starting materials, reaction intermediates and other process impurities. In addition, it is often necessary to monitor multiple parameters or parallel reactions simultaneously.

High throughput approaches provide important time savings in the optimization of chemical synthesis parameters. Sample preparation of reaction mixtures are often as minimal as filtration and dilution prior to injection into the chromatographic system. This allows the chemist a simplistic approach to provide faster turnaround of results and advancement to the next step.

Here, we will discuss the use of UltraPerformance Convergence Chromatography (UPC2) coupled with mass spectrometry for monitoring and optimization of several synthetic routes of three pharmaceutical active ingredients. We will discuss the utility of UPC2 for chiral and achiral separations, synthetic route optimization, and separation orthogonality compared to common reversed-phase liquid chromatography (RPLC).

Chiral and Achiral Reaction Screening
During the discovery and development of pharmaceutical products, there is a need to monitor the reaction progress. In many cases, both chiral and achiral analyses are needed. Achiral analyses, which are typically performed by RPLC, are used to determine the synthetic yield of the final product or intermediate enroute to the final product. Chiral analysis is used to separate enantiomeric species. The scientist acquires this information chromatographically, typically by normal phase liquid chromatography (NPLC), in an effort to determine purity of the desired enantiomer. Quite often, one enantiomer is determined more biologically active and chiral analysis is primarily performed to determine the absolute difference between the mole fraction of each enantiomer. This analytical determination is referred to as enantiomeric excess (E.E). For effective chiral screening, it is common that several chiral chemistries are required to separate each of the chiral components. For this reason, it is beneficial for a chromatographic system to hold multiple columns that can be individually temperature controlled as column stability may be different. Historically, analysing yield and E.E. requires either two analytical systems or one system compatible with both RPLC and NPLC analysis, with the required time necessary to convert between the two chromatographic modes. With the introduction of convergence chromatography, both yield and E.E. can be assessed on a single system without the need to change mobile phases and often using the same chromatographic conditions.
To illustrate the capability of UPC2 to be used in a reaction monitoring setting, a reaction mixture from the synthesis of clopidogrel was analysed using chiral and achiral columns on an ACQUITY UPC2 system (Figure 1). The separations were performed on a single system with the same samples, diluents, eluents and gradient for each analysis. It should be noted that this experiment cannot be achieved efficiently on a typical LC instrument without a labour intensive change from RPLC and NPLC. As shown in Figure 1, different chiral columns were needed to separate each of the racemic pairs of interest. The chiral starting material and chiral product were monitored using two different chiral columns, while the achiral separation provided general information about the reaction kinetics. Compatibility of the separation with mass spectrometry (MS) allowed peak identification and confirmation of the starting materials, intermediates, products and process impurities. 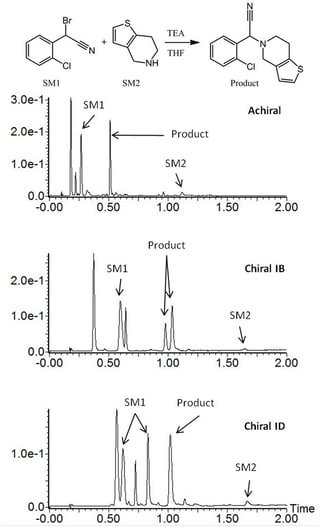 Figure 1: Analysis of clopidogrel intermediate. Achiral and chiral separations performed sequentially on the same system with the same gradient.

Reaction Monitoring and Optimization
Reaction optimization is an integral part of process development to ensure a timely and efficient route to the desired compound. This requires chromatographic instrumentation capable of high performance, versatility and robustness to accurately model the kinetic rates of the reaction, determine impurity fate throughout each synthetic route, and troubleshoot unpredictable results. As an example, we investigated another reaction in the synthetic route in clopidogrel. We determined that the synthetic yield and overall reaction rate for the condensation of an alkyl bromide with an alkyl amine was poor. The literature specified THF (b.p. 66 °C)1 as the solvent; however, we observed a slow progression of the reaction. After refluxing the reaction overnight, significant starting materials remained giving poor yield of the desired product.
To overcome this issue, we substituted dioxane (b.p. 101 °C) for THF with the goal of increasing the rate of the reaction and yield. We were able to track the progress of these modified conditions by taking aliquots from the reaction, diluting the aliquot in methanol, and performing the analysis with the ACQUITY UPC2without further workup (Figure 2). 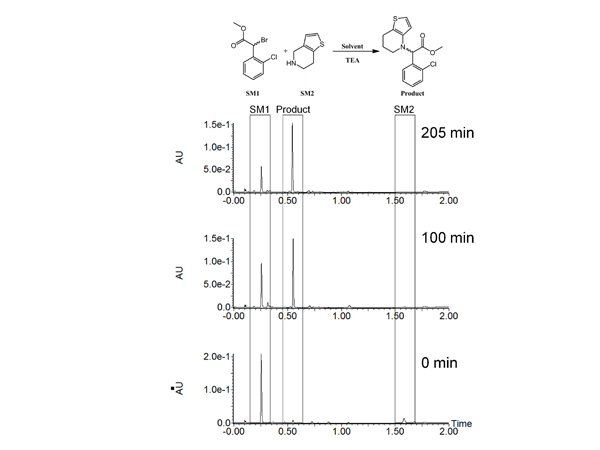 Figure 2: Reaction optimization for synthesis of a clopidogrel intermediate. Reaction mixture was analysed at several time points and the consumption of starting materials and formation of products were tracked.