In convergence chromatography (CC), the modes of interaction between the stationary phase and the solute are numerous, including hydrogen bonding, hydrophobic interactions, dipolar and polarizability interactions and solute partitioning [1]. These interactions can be manipulated by a number of variables including sample diluent, column chemistries, organic modifiers and physical factors.

The wide array of available column chemistries allows for numerous retention mechanisms and selectivity. Organic modifiers and additives can affect the charge of the analyte and/or column chemistry thereby influencing peak shape and retention. Physical factors, including temperature and pressure, impact the density of the CO2 thereby affecting eluent strength. Combining and optimizing the impact of these factors can be a complex and time-consuming method development process. To streamline this process we will describe some practical considerations for the analysis of pharmaceutical compounds by convergence chromatography.

Method Development Considerations
Convergence chromatography is generally practised as a normal phase technique employing non-polar mobile phases. As a result, polar sample diluents (e.g. methanol) can result in a strong “solvent-effect” that can cause peak distortion. This is particularly pronounced for early eluting peaks. Given these considerations, non-polar sample diluents, such as hexane, are preferred. However, most pharmaceutical compounds are bases that are not readily soluble in non-polar solvents. Universal diluents (DMSO, DMF) traditionally used in reversed-phase chromatography often retain on the column in convergence chromatography and thus affect quantification of co-eluting compounds at low wavelengths. Mixtures of IPA and heptane can provide a balance between solubility and polarity. These factors must be considered in sample preparation and necessitate careful evaluation of sample diluents.

While sample preparation can have an impact on chromatography, the first step of most method development strategies involves evaluating the stationary phase-solute interaction. Given the multi-modal interactions between the stationary phase (SP) and the solute (S), selectivity is often most easily manipulated by the choice of column chemistry. Achiral stationary phases for supercritical fluid chromatography are typically characterized by polarity: non-polar, moderately polar and very polar [1a, b]. The selectivity differences of these stationary phases for pharmaceutical compounds have been evaluated in a number of studies [2]. In the absence of modifier additives, many basic pharmaceutical compounds exhibit greatest retention or do not elute on non-polar SPs, whereas more polar SPs provide reduced retention times and improved peak shape. To illustrate this, pharmaceutical compounds were screened on both polar and non-polar SPs using CO2 with methanol as the modifier (Figure 1). The solutes differ in physical parameters including polarity, pK, ionic activity, hydrogen bonding, stearic hindrances and π-π interaction potential. The non-polar SP (HSS C18 SB) provided less symmetrical peak shapes and generally later retention times for the most polar solutes, when compared with the more polar columns (2-ethylpyridine and CSH Fluoro-phenyl). Additionally the BEH 2-ethylpyridine SP provided the smallest separation space. However, while more polar SPs often provide the earliest elution and symmetrical peak shape for basic pharmaceutical compounds, careful screening must be performed to ensure optimum selectivity is achieved.

While polar SPs may provide an improvement in peak shape over non-polar SPs, for highly polar pharmaceutical compounds (pKa > 7) this non-polar separation technique generally requires the use of additives in the mobile phase for elution and symmetrical peak shape. These additives can affect selectivity by changing not only the SP-S interaction but also the solute(S)-mobile phase (MP) interaction. For highly basic pharmaceuticals, basic additives, such as amines or ammonium-based, can improve peak shape [3]. For example, the previously tested pharmaceuticals were screened using CO2and 20 mM ammonium acetate in methanol as the additive and modifier on various SPs (Figure 2). The addition of base provided more symmetrical peak shapes and earlier retention times for the more polar solutes on both SPs. Selectivity differences, while less than those observed in the presence of no additives (Figure 1), were still apparent between the columns, with the bare particle (BEH) providing the greatest selectivity space for these analytes.

While the effect of additives can either enhance or mask analyte interactions with the stationary phase, basic and acidic additives in CC can have significantly different results. Therefore, depending on the characteristics of the solutes, sometimes more than one additive may be required. For basic pharmaceuticals, basic additives [3a, 4] or ion-pairing reagents [5] provide improved peak shape, whereas for acidic analytes, acids are typically used to improve peak symmetry [4]. This phenomenon can be illustrated by the analysis of metoclopramide-related impurities, a mixture consisting of many side group functionalities including amines, carboxylic acids and hydroxyl groups. These varied functional groups can make choosing a suitable additive challenging. In fact, screening of both acidic and basic additives for (compounds F and H) metoclopramide-related impurities produced different results depending on the solute’s functionality. Acidic solutes (compound H) with hydroxyl (or polyphenols) functionality benefitted from the use of formic acid as an additive, while the addition of a basic additive, such as ammonium formate, resulted in no improvement in peak shape [Figure 3A]. For basic solutes such as compound F that contained primary, secondary and tertiary amines, the opposite phenomena were observed [Figure 3B]: Peak shape improved with the addition of ammonium formate while no benefit was observed in the presence of acidic additives. Thus for these set of solutes, combining formic acid and ammonium formate provided the benefits of each additive resulting in acceptable peak shape for all solutes. Addressing peak shape ultimately affects the efficiency, resolution and sensitivity of the chromatographic separation.

Once method conditions providing the desired overall retentivity and peak shape have been selected, additional parameters can be manipulated for optimum selectivity. A factor commonly explored is the effect of modifier and/or blends and their impact on selectivity. In CC, methanol is one of the strongest modifiers resulting in less retention for most solutes as compared with weaker modifiers such as 2-propanol and acetonitrile. Thus the effect of changing or blending modifiers can be impactful, particularly on retentivity and selectivity of the solutes. For example, for the analysis of metoclopramide and related impurities a less polar, aprotic organic solvent (acetonitrile) was combined with a strong protic modifier (methanol) at varying concentrations (Figure 4). The addition of the weaker elution solvent increased the retention and resolution of the polar analytes, thereby increasing the selectivity space. Based on these observations, this technique can prove to be a powerful tool in CC method development.

In addition to the chemical parameters that have been previously described, physical conditions can also be manipulated in CC method development. Evaluating the effect of temperature, pressure and gradient slope on the CC separation of pharmaceuticals provides fine tune adjustments to the method development process. Temperature and pressure can affect retention and selectivity by altering the density of the CO2; whereas gradient slope may provide faster analysis times and narrower peaks, while maintaining selectivity. 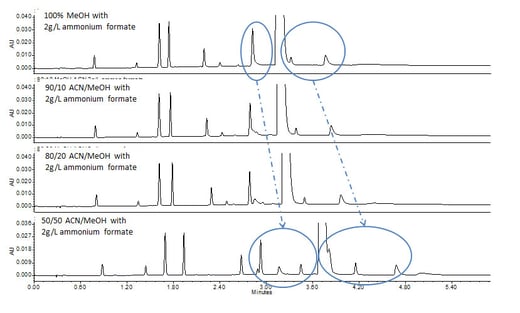 Figure 4: Effect of modifier blends on analysis of metoclopramide and related impurities.

Comparison to Normal Phase HPLC
As previously described the principles and method development of CC are similar to those of NP-HPLC. Thus method conversion can be performed to reduce solvent usage and disposal that would in turn lower cost per analysis while enhancing green initiatives. However, the conversion of USP methods must maintain data quality and produce results that are equivalent to the original method. To illustrate this, a comparison of convergence chromatography to a normal phase United States Pharmacopeia (USP) method was performed (Figure 5). The USP method, for the assay of the drug substance tolbutamide (benzenesulfonamide, CAS# 64-77-7), specifies a normal phase isocratic HPLC method. Like most compendia methods, this method is well proven and reliable, it does however use a complicated mobile phase mixture that contains hexane and THF, solvents that many labs would like to eliminate for safety, green initiatives and reduced costs (Figure 5A).

Figure 5: NPLC (5A) and CC Comparison (5B) of the analysis of tolbutamide and tolazamide.

By exploring the method development approach outlined, a CC method was developed that not only met the required USP suitability values but also provided less solvent consumption and faster analysis times (Figure 5B). The newly developed isocratic CC method used methanol/2-propanol as the modifier with 0.2% TFA as an additive for peak shape. The ion-pairing reagent provided peak shape benefits for the basic compounds while the addition of 2-propanol expanded the separation space. The results allowed for both comparable resolution of the 2 compounds of interest (R = ~15) with an improvement in peak tailing of the internal standard, tolazamide, as compared to the NP-HPLC method. These benefits were achieved in a significantly faster run time while eliminating the use of hexane and THF [6].

Like all separation techniques, the analysis of pharmaceutical compounds by CC poses particular challenges. For very polar compounds such as many pharmaceuticals, this non-polar separation technique typically requires careful evaluation of sample diluents, modifiers and additives for elution and symmetrical peak shape. By systematically screening diluents, columns, modifiers and modifier additives to achieve the best separation these challenges can be overcome. Furthermore, using this approach newly developed methods can take full advantage of the unique selectivity, low solvent usage and high separation efficiencies of convergence chromatography for the analysis of a wide range of pharmaceutical compounds.