The selection of the proper background electrolyte (BGE) is key to a successful CE method. We first look into the choices for BGE based on our analyte properties. Capillary electrophoresis (CE) is based on migration of charged components in an electric field.

So when we start our method development, the first thing we need to consider is how to get our analytes to carry charge. We will look into the effects of pH on analyte charge and discuss opportunities to induce charge on neutral analytes. Additionally, we look into those aspects of a BGE that make the peaks sharp and the precision and robustness good.

Charging through (de-)protonation
From the molecular structure and the active groups, we know or can estimate our analyte’s pKa(s). For an acid, if you have a solution above its pKa, it is deprotonated and negatively charged. For a base, if the pH is below the pKa, the base gets protonated and the compound will carry positive charge. Generally, we say that if you are at least two pH units away from the pKa, the compound is completely protonated / deprotonated. If an analyte has multiple functional groups, such as a zwitterion, it carries a net charge at a certain pH that results from the sum of the individual charges of the functional groups. So the first consideration for our separation medium, our background electrolyte BGE, is to select a pH at which our analytes are charged.

Induction of charge through interaction with BGE
Sometimes we have to deal with uncharged analytes, or a complex mixture for which there is no pH at which all analytes carry charge. We need charge in order to separate in CE. So can uncharged analytes not be separated then? Not as such, but of course clever people found elegant solutions to that. One of these people is professor Terabe, who introduced MEKC, micellar electrokinetic chromatography, with micelles as a pseudo-stationary phase to induce charge to otherwise uncharged components. Other people have developed on on that theme and published solutions such as micro-emulsion electrokinetic chromatography MEEKC, or charged cyclodextrins. Cyclodextrins are used for chiral separations, of which more in a later issue, but can also be beneficial to improve separation of achiral components. The common factor in all these applications is that there is a dynamic equilibrium of the (uncharged) analyte with a charged BGE component, thus inducing charge by way of a dynamic interaction. The net mobility for the analyte then depends on how strong the affinity for the charged BGE component is. 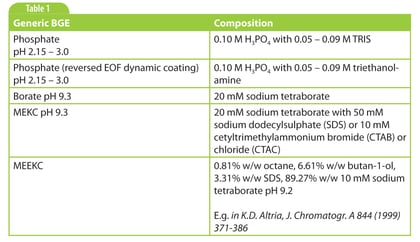 Why we need a buffering BGE
In order to fix the pH of the background electrolyte, it is not sufficient to adjust the pH of an arbitrary solution. As soon as we apply the voltage over our capillary, electrolysis of water occurs at the platinum electrodes. This means that at the cathode, water reacts with electrons into hydrogen gas and OH-. At the anode, water reacts into oxygen and protons:

So as soon as we switch on the power supply, the pH in our inlet and outlet vials will change if we do nothing to prevent this. That is the reason that a BGE should always be a buffer. A buffer is a solution that is able to resist the pH shift that would otherwise be caused by a substantial addition of a strong acid or base. One of the few exceptions for using a buffering BGE is CE-MS, where the need for volatile BGE compounds overrules the need for buffering the BGE.

There are many buffers known in literature, so what is a good choice? Well, it depends (you will hear this more often). Inorganic buffers such as phosphate and borate are nice because they show very little UV absorption, which means that we can go to very low wavelengths such as 190–210 nm for sensitive detection, if needed. And they are cheap. But because they are small ions, often with multiple charges, they can result in relatively high currents. Zwitterionic buffers have the advantage that they have a low mobility, resulting in far lower currents than inorganic buffers. This means that higher concentrations and therefore higher buffering capacities can be used. The disadvantage is that these buffers absorb more in the low-UV region.

My personal preference is to start simple, if there are no indications to do otherwise. That is, a phosphate buffer around pH 2–3 for basic analytes, and a borate buffer pH 9 – 9.5 for acidic analytes. Other commonly used buffers are listed in the Table 2. 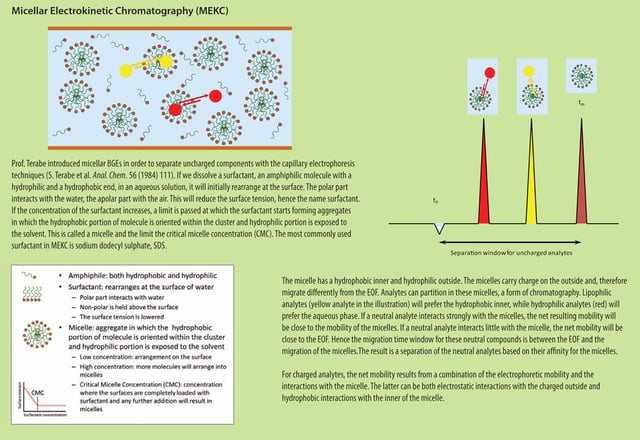