We typically think of a mass spectrum as consisting of a precursor ion at high m/z and a series of increasingly lower m/z product (fragment) ions. These types of mass spectra are shown in training courses and textbooks as didactic examples because they are easy to interpret “by hand”. A spectrum with these characteristics arises from the selection of a single-charge precursor ion. However, these teaching examples can be misleading to the beginning mass spectrometrist who may come to believe that any proper MS/MS experiment begins with selection of a single-charge precursor. In this edition of MS Solutions we will show that use of multiple-charge ion precursors is useful (and often essential), to obtain best results, particularly for peptide sequencing experiments.

There are three key user-settable parameters which control fragmentation efficiency in an electrospray LC/MS/MS method employing a tandem instrument:

We typically draw a single-charge positive ion of a peptide with the proton residing on the N-terminus. However, this is inaccurate. We know that the proton must be able to move rather freely or we would not see production of the variety of structurally significant ions that we know occur in peptide MS/MS. We therefore refer to the proton on a single-charge peptide ion as a “mobile” proton and recognize that there is some probability of the proton residing on any nitrogen in the polypeptide chain: the N-terminus, any of the peptide-bond nitrogens, or nitrogens in the basic side-chains of arginine, lysine, and histidine. Figure 1 shows the mobile proton concept schematically. This peptide, when used as an MS/MS precursor ion, is likely to form a variety of structurally useful product ions.

Fragmentation in low-energy CAD is a result of charge-site driven mechanisms. Therefore, the adducted proton must exhibit mobility in order for single-charge peptide precursors to generate product ions representing various backbone bond cleavages, e.g. b 1, b 2, b 3, etc. An adduct proton located on the peptide backbone also explains the production of complementary ions, e.g. both y and b ions from the same bond cleavage. An example mechanism for formation of complementary product ions is shown in Figure 2. The charge site on this pentapeptide is on the peptide bond between residues 3 and 4 and cleavage of this bond results in production of both the y 2 and b 3 ions.

Figure 2: Charge-site driven fragmentation of a pentapeptide showing importance of the mobile proton concept in production of complementary ions from the same bond cleavage. (Courtesy of Jack Throck Watson).

The most commonly used proteolytic enzyme in protein sequencing experiments is trypsin. Trypsin cleaves the peptide bond on the C-terminal side of lysine and arginine residues. This means that nearly all tryptic fragments exhibit either an arginine (R) or a lysine (K) on the C-terminus. In the case of a C-terminal arginine, the mobility of the proton is severely limited by the presence of the strongly basic side-chain. The proton of a single-charge ion is, in fact, believed to be sequestered on the arginine sidechain [Figure 3(a)]. This places the charge site remote from the peptide backbone, i.e., remote from the desired cleavage sites. As a result, single-charge precursors with a C-terminal arginine exhibit severely limited production of structurally useful product ions.

[Figure 3(b)] illustrates that the solution to this problem is the selection of multiple-charge precursor ions. In this situation, while one proton is sequestered on the R side-chain, the other acts as a mobile proton and provides the necessary heterogeneity of charge to produce a structurally significant group of product ions.

A real-world example of this effect is shown in Figure 4. Electrospray spectra were collected for the synthetic peptide AFLDASR. Figure 4(a) shows the result of selection of the single-charge ion as the precursor. The lack of any significant number of structurally significant ions is a result of the sequestration of the charge on the C-terminal arginine. Figure 4(b) shows the same experiment except in this case the double-charge ion is selected as the precursor. We still see a y-ion dominated spectrum which we expect given the fixed charge on the C-terminus, but a reasonable number of ions are available for sequence determination. It is also important to note that the double-charge precursor ion is found in the middle of the mass-to-charge ratio range and that product ions are present which have both higher and lower m/z values than the precursor. This somewhat complicates interpretation, at least if done by hand calculation. 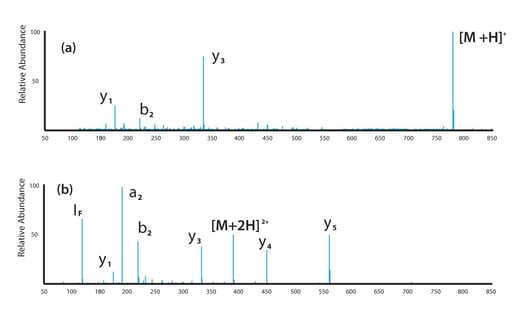 Figure 5 shows a spectrum for the peptide AFLDASK, i.e., the only change in the sequence from the peptide in Figure 4 is substitution of a terminal lysine (K) in place of the arginine. The spectrum was obtained using a single-charge precursor and illustrates that lysine does not severely curtail proton mobility. A good variety of both N- and C-terminal ions are produced.
An interesting side-note to Figure 4 is production of a very abundant y 3 ion. This ion is produced by peptide bond cleavage to the C-terminal side of aspartic acid (D). This bond cleavage has been observed in a variety of aspartic acid-containing peptides with C-terminal arginines.

There are many sequence-dependent fragmentation patterns and more are being discovered all the time. The C-terminal arginine problem is fairly obvious but many, such as the aspartic acid example, are more subtle. It is therefore a good rule-of-thumb that if an inadequate number of structurally significant product ions are observed for a single-charge precursor then seek a multiple-charge precursor ion. While our focus here has been on peptide fragmentation, the same rule can be applied to other types of MS/MS experiments in which the analyte is capable of forming a multiple-charge ion.