One of the most significant and important applications for mass spectrometry is the sequencing of polypeptides by electrospray LC/MS. An error in the sequence or the substitution of one amino acid with another can completely alter the biological function of a peptide molecule. Determination of sequences is therefore a vital part of biomedical research, proteomics, and the manufacture of peptide-based drug substances. We will discuss the basics of peptide sequencing with mass spectrometry in the next two issues of MS Solutions.

The sequence of a polypeptide is determined by subjecting the ionized peptide to fragmentation by collisionally activated dissociation (CAD) in an MS/MS instrument. Peptides are introduced through an electrospray interface and are protonated to form positive ions of the type [M+nH]+n where n ≥ 1. These ions are selected as MS/MS precursors. A wide variety of product ions may be formed because of bond cleavages along the polypeptide backbone or partial to complete cleavage of amino acid side-chains. Those bond cleavages which occur along the peptide backbone are the most important for sequence determination, particularly the b and y ions which result from cleavage of peptide bonds. The neutral losses resulting from formation of b and y ions represent amino acid residue masses and this simplifies interpretation of the MS/MS spectra.

Figure 1 shows the nomenclature which has been adopted for naming the ions formed from peptide backbone cleavages. The vertical lines show the bond cleavage and the arrows point to the product ion, the remaining portion of the precursor being the neutral loss. The product ions are referred to by the letters a, b, c and x, y, z . The a, b, c series of ions refer to the charge remaining with the N-terminal portion of the peptide ion while the portion containing the C-terminus is the neutral loss. Peptide sequences are, by convention, listed from the N- to the C-terminus, therefore the choice of the a, b, c nomenclature is pneumonic as these are the first three letters of the alphabet. Similarly, the x, y, z ions are those product ions in which the charge is retained on the C-terminal portion of the ion.

Figure 2: The concept of a ‘mobile proton’.

Figure 2 illustrates the concept of a ‘mobile proton’ meaning that for a single charge peptide ion the proton might reside on any of the amide nitrogens or on the N-terminal amine. The probability of a proton adducting to a given nitrogen in the peptide is largely dependent on the amino acids present in the sequence and this, in turn, leads to CAD fragmentation patterns being sequence-dependent — more about this in a future installment of MS Solutions.

Figure 3: Mechanism for formation of both b and y ions.

Figure 3 shows a mechanism for formation of both b and y ions from the same bond cleavage. Under CAD conditions, electrons move in response to the charge resulting in cleavage of the peptide bond proximal to the charge, i.e., between residues 3 and 4. The intermediate species in this reaction is a heterodimer as illustrated in the figure. There is some probability of the proton adducting to either the residue 3 or residue 4 amide nitrogen. Thus two fragment ions are probable, i.e., both a y 2 and a b 3 ion. The structure of these two ions is shown along with their corresponding neutral losses. 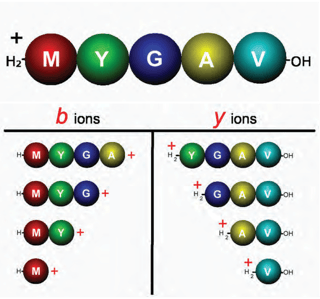 Figure 4: Penta-peptide single-charge precursor ion and the complete series of b and y product ions that may appear in an MS/MS spectrum.

The proton mobilization theory also explains how CAD fragmentation of a single-charge peptide ion can result in formation of a complete or nearly complete series of ions of a particular type. Figure 4 illustrates a penta-peptide single-charge precursor ion and the complete series of b and y product ions that may appear in an MS/MS spectrum. In Part 2 of this article we will show the spectrum resulting from this experiment and discuss in detail an interpretation strategy leading to a complete sequence determination.