Reducing the internal diameter of your HPLC columns is an advantage for electrospray (ESI) LC/MS users. To understand this, two characteristics of ESI must be understood: (1) how response (i.e., peak area or height), is related to analyte concentration and (2) how response varies with HPLC flow rate.

The mass analysed ion signal for an ionic analyte increases proportionately to the analyte ion concentration in solution from 10-9 M (detection limit) to 10-5 M. This linear range lies below the concentration of electrolyte impurities in the solvent (methanol), which is 10-5 M. From 10-5 to 10-4 M, the signal increases with approximately the square root of the concentration; and, at higher molalities, the signal ‘saturates’ and begins to decrease. [1]

Electrospray Response Depends on Flow Rate
There is a considerable difference in the response of an electrospray detection system as the flow-rate of the incoming HPLC effluent is changed. Referring to Figure 1, we see a tenfold increase in signal in this infusion experiment as the flow-rate of solvent into the interface is decreased from 1 mL/min to 50 μL/min. Atmospheric pressure chemical ionization (APCI), shows very little flow-rate dependency and what little change in response is observed is the opposite of electrospray; i.e., response decreases slightly with decreasing flow rate.

Characteristics of Narrow-Bore HPLC Columns
We have come to think of 4.6-mm internal diameter (ID), HPLC columns as the “standard” analytical column. These columns operate at moderate backpressures and, when coupled with stationary phase particle diameters of 5 μm or less, provide very good separation efficiencies.
Our interest in this article is with “narrow-bore” columns which we will define at 1–2-mm internal diameter columns. These columns can generally be used with standard analytical HPLC systems. The operational characteristics of these columns differ from 4.6-mm columns in several ways which are important for the HPLC user to understand. But the first thing users must understand is what these columns do not do.

Reducing the internal diameter of a gas chromatography (GC) column results in a dramatic improvement in efficiency (number of theoretical plates), and therefore allows for better resolution between closely eluting peaks. The reason for this dramatic improvement in GC with smaller ID columns is reduction in the contribution of radial diffusion (i.e., movement of analyte toward the walls of the column), to band-broadening. In an HPLC column there is virtually no band-broadening from radial diffusion and therefore a narrow-bore column is not inherently more efficient than a 4.6-mm column when packed with the same stationary phase.
Narrow bore columns compared with 4.6-mm columns with the same stationary phase material will:

I have italicized the last two points because they tie in directly to the discussion above about operational characteristics of electrospray, namely: The reduced flow rate and increased analyte concentration seen with narrow-bore columns both result in improvements in the signal from electrospray LC/MS.

Table 1: The relative flow rate required to maintain an equal linear velocity in columns of varying ID. See the text for further explanation

Determining Optimum Flow Rate for Narrow Bore Columns
An important chromatographic parameter is the velocity of the mobile phase through the column, referred to as linear velocity, symbolized u.
The van Deemter equation tells us that the optimum efficiency (measured as H, height equivalent to a theoretical plate), for a given stationary phase material is found at the optimum mobile phase linear velocity. This optimum value for u is independent of column dimensions.
Linear velocity can be defined in terms of mobile phase flow rate (in mL/min) and column cross-sectional area:

To maintain the same linear velocity when column ID is reduced, the mobile phase flow rate must be reduced by the inverse square of the column internal radius. (See Table 1)
Combining the numbers in Table 1 with the plot in Figure 1, it appears that simply scaling down our ESI LC/MS method from a 4.6-mm to a 1-mm ID column could result in a tenfold improvement in response from the mass spectrometer! 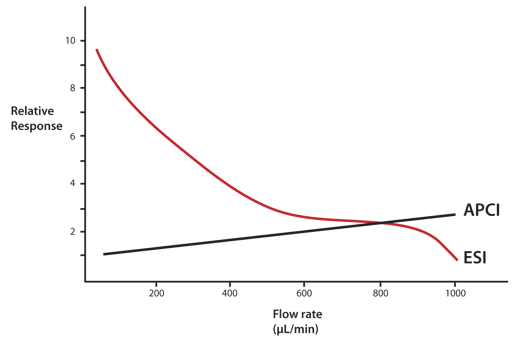 How much better?
Equation 2 given below shows the maximum in-peak concentration in the mobile phase at the detector (Cmax) [2].

Cmax is dependent on the absolute amount of sample loaded onto the column (m ) and the column efficiency in number of plates (N) and is inversely proportional to the column dead volume (V0), and the capacity factor (k ). V0 is, of course, related to the column internal diameter. It can be shown that the relative value of Cmax for two different columns which have the same stationary phase (i.e. the same k value), and are operated at the same linear velocity [i.e., the same efficiency (N)], is equal to the ratio of the squares of their internal diameters. (You will recall this is the same relationship for the column flow rates in order to maintain the same mobile phase linear velocity.)
Scaling down from a 4.6-mm to a 2-mm internal diameter column increases the “in-peak” concentration at the detector by about fivefold. The increase for a 1-mm column is about 20-fold!
A simple change of column diameter and a little knowledge of how to properly scale down your method can yield remarkable improvements in your ESI LC/MS methods’ limits of detection.