This technical article is looking at the incorporation of FAIMS/DMS into a conventional LC/MS system to provide an added dimension of ion separation which is orthogonal to both chromatographic and mass spectrometric separation mechanisms. In a previous article, we described the technology behind Field Asymmetric Ion Mobility Spectrometry (FAIMS), also known as Differential Mobility Spectrometry (DMS). In that article we learned that ions of identical m/z value may be separated in a FAIMS/DMS device based on their mobility differences in a high potential electrical field.

Chromatography and mass spectrometry are both powerful separation tools. The former relies on chemical affinity of the analyte for a selected stationary phase while the latter separates on the basis of mass-to-charge ratio (m/z). The combination of the two in hybrid instruments such as LC/MS results in separation potential which is far greater than the two techniques can ever realize separately. However, some problems remain in the separation of isomeric (same elemental composition) and isobaric (same mass) analytes. Placing a FAIMS/DMS device between the chromatographic column and the mass spectrometer can solve many of these types of problems.

Figure 1: Operation of FAIMS/DMS with an LC/MS system.

In Figure 1, analytes are separated chromatographically, gas-phase analyte ions are formed in the interface, and are carried into the FAIMS/DMS device by a carrier gas. Ions move radially back-and-forth in the FAIMS/DMS device driven by the asymmetrical electrical field. A compensating DC voltage (CoV or CV), which allows selected ions to pass through the device is chosen by experiment. A method is developed by rapidly scanning through values of CoV while the peak of interest is eluting.

Separation of positional isomers
An interesting example of the use of FAIMS/DMS to separate isomeric peptides is presented in Figure 2.1 These peptides have identical sequences and differ only in the location of a phosphorylation. Consequently, they cannot be separated by chromatography or by mass spectrometry, as demonstrated by the TIC in the upper half of the figure. 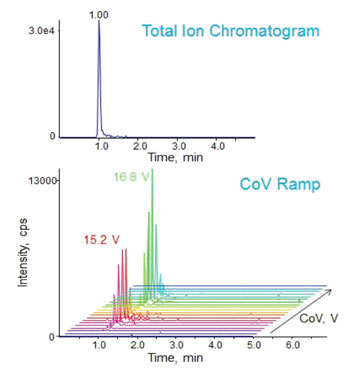 Figure 2: Peptide positional isomers cannot be separated by conventional LC/MS (upper chromatogram). The same isomers can be separated by the addition of FAIMS/DMS to the LC/MS system and selection of appropriate compensating voltages (CoV), as seen in the lower half of the figure.

The bottom portion of the figure shows the same experiment with FAIMS/DMS activated and a rapid scan through CoV values from ~14-18V. It can be seen that the two peptides are clearly separated in the CoV dimension of the plot. The peak CoV value for each isomer is shown, i.e. 15.2 V and 16.8 V respectively. By switching between these two voltages during peak elution, baseline resolved peaks for each isomer can be produced and used as precursors for an MS/MS sequencing experiment. 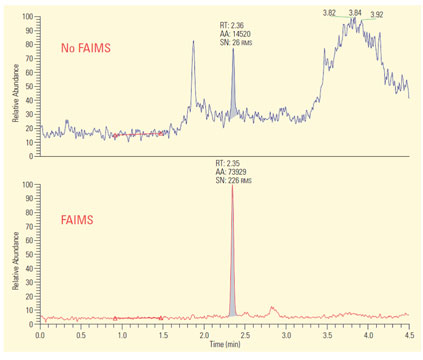 An excellent example of this use of FAIMS is removal of background ions in tissue extracts.2 Figure 3 shows two LC/MS-SRM (selected reaction monitoring) chromatograms from a clinical assay for linoleic acid and its D4-labeled internal standard in cancer cell extracts. The assay employs electrospray in the negative ion mode. In the upper trace, LC/MS by itself was employed and the severe background interference resulted in a relatively poor signal-to-noise ratio (s/n) and a lower limit of quantitation (LLOQ) of 5 ng/mL. All conditions in the lower trace are identical to the upper except that a FAIMS device was placed after the ESI and before the mass analyzer. Investigation found an appropriate setting for the FAIMS compensation voltage (CoV) which excluded all background ions and allows the linoleic acid characteristic ion to pass into the MS. As a result the s/n was improved 100-fold and the LLOQ was reduced to 500 pg/mL.

Other exciting developments are underway involving the use of FAIMS/DMS with LC/MS assays. Modifiers have been added to the FAIMS/DMS carrier gas which change the mobility characteristics of ions by clustering/declustering with the ions as the electrical field is changed from high to low potential.3 These modifiers are simple HPLC organic solvents (e.g. acetonitrile, methanol). Modifiers amplify the mobility differences between difficult to separate ions.

A miniaturized FAIMS-on-a-chip device has been developed which addresses some of the time-scale issues when merging FAIMS with rapid HPLC separations. The miniaturized device also allows use of higher field potentials and therefore improved mobility separations (see http://www.owlstonenanotech.com/faims).