Sometimes I don’t know whether to be amused or dismayed when I am presented with an HPLC method. Whether it is a method question from one of the readers or a paper to review for the 'Journal of Chromatography', it is a bit surprising to me how often methods undergo a process that I refer to as “genetic drift.” This kind of method results from constant tweaking of existing methods to perform new tasks. Let’s look at some examples of such methods.

A method uses a C18 column run at 1.0 mL/min with a mobile phase of 35% of a buffer comprising 25 mM phosphate and 25 mM triethylamine (TEA) adjusted to pH 2.5 with phosphoric acid, plus 65% methanol (MeOH). Looks pretty straight-forward, doesn’t it? But what is the TEA there for? TEA was a common mobile-phase additive when the older, low-purity, type-A silica columns were common. For example, µBondapak, Novapak, Lichrosorb, Supelcosil, Zorbax, Hypersil, and other columns that were in common use before 1990. These columns were based on silica particles that had significant metal contamination and very acidic silanol groups that resulted in severe peak tailing, especially for basic compounds. One way to reduce peak tailing was to add a low-molecular-weight base to the mobile phase. This competed with the samples for these acidic active sites, and when put in the mobile phase at a constant concentration, served to suppress tailing. It made a lot of sense, and was a wise addition to the mobile phase in thousands of methods over the years. But with the advent of the newer, higher-purity, type B silicas in the mid-1990s, the older silicas have been phased out in most cases. Yet TEA remains? Why? Is it necessary? No. Does it hurt anything? Probably not. 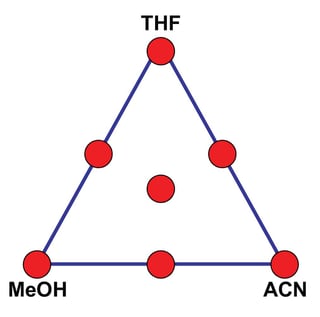 Or what about methods with two or more organic solvents. For example, a method with MeOH, acetonitrile (ACN), and buffer. Again, a pretty simple mobile phase – what could be wrong here? Well, if we look back in chromatographic history, in the late 1970s and early 1980s, there was a big movement to take advantage of solvent selectivity. Growing out of the work of Lloyd Snyder, Jack Kirkland, Joe Glajch, and others came a “solvent triangle” approach to method development. This is illustrated in Figure 1, and resulted in a commercial product called Sentinal sold by DuPont when they were in the HPLC business and later by Perkin-Elmer as their PESOS (Perkin-Elmer Solvent Optimization System). The strategy worked like this for an isocratic method. You used a MeOH-buffer mobile phase to get the best possible separation with MeOH as the organic solvent, then repeated the process with ACN-buffer and tetrahydrofuran (THF)-buffer. These experiments formed the corners of the triangle (red dots in Figure 1). Next, the corner mobile phases were blended 1:1 to get the midpoints on the edges and 1:1:1 to get the center point. With 7 experiments, you could find the optimum mixture of solvents for your separation, either by visibly interpolating between chromatograms or using one of the commercial calculation programs. This was a great idea when we didn’t understand much about the chromatographic process, but with today’s increased knowledge, this level of complexity just isn’t needed. The development of the linear-solvent-strength theory and separation modeling software tools, such as DryLab, have made ternary or quaternary solvents largely unnecessary. If I consider the number of methods that I’ve seen that really require three organic solvents, I could probably count them on one hand – it just isn’t necessary anymore.

Then there’s the well-thought-out method for a mixture of acids and bases. It uses a low-pH buffer in the mobile phase to suppress ionization of the acids for good retention and adds in an ion-pairing reagent to give acceptable retention of the bases. It works great. Then you need to develop a new method for a related acidic compound. Why not start with the current conditions? The method ends up with ion-pairing conditions, even though they are of no added benefit.

I’m a strong believer in the KISS principle (Keep It Simple, Stupid), or as one of my colleagues tells me, be more politically correct and use the Scandinavian spelling, KYSS (Keep Your Solvents Simple). In either case, the more stuff you put in your mobile phase, the more potential problems you’ll have. It may be appropriate to build the next method on the previous one, but you should interview each component of the method: Why are you here? What benefit will you bring to the separation? Do you bring any liability with you? If there is a logical reason to include a reagent, by all means include it, but if you aren’t sure why something is there, do a little investigation.

Don’t let your methods suffer from genetic drift – Darwin’s principles shouldn’t be applied to chromatography. Method A morphs to Method B which is changed to Method C and then adapted to Method D. Method D doesn’t even analyze the same class of compounds as Method A, yet it carries along specific components unique to Method A’s samples. Build your methods on sound chromatographic principles and you will encounter fewer surprises when an unexpected change takes place.