In a previous blog we took a brief look at why we might decide to use an internal standard and how a calibration plot is constructed and used in HPLC analysis. This time, we’ll consider some properties that are necessary when choosing a compound to use as an internal standard. These are listed in Figure 1. 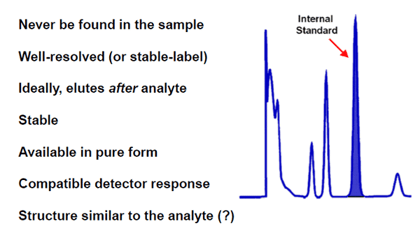 It is very important that the internal standard never be found in the sample. This should be pretty obvious – if the internal standard (IS) is normally, or possibly present in the sample and you add a known amount of IS to each sample, how can you tell if the peak you observe is attributed to the IS added or the IS normally in the sample? There are certain cases for LC-MS when it is impossible to completely avoid this, but we’ll talk about it in a later blog.

It should also be obvious that the internal standard must be well-resolved from the other peaks in the chromatogram. If the IS overlaps with another peak, how are you going to assign an area or peak height to the IS peak? There is one exception to the requirement of chromatographic resolution, and this is for stable-label (isotopic label) internal standards with LC-MS. Because the MS detector can usually differentiate between the IS and analyte if they co-elute, they don’t have to be chromatographically resolved. Again, we’ll talk about this in another blog.

As a general rule, we would like to select an internal standard that ideally elutes after the analyte. This is not a hard-and-fast requirement, but it can enhance the function of the IS. The IS will have the same retention time and peak response (area, height, shape) in each chromatogram. If you notice that the retention time and peak response are within normal variation for that method, you can be fairly confident that all peaks that are eluted before the IS also eluted under acceptable conditions. If the response is abnormal, you suspect the response for preceding peaks, as well, and may choose to reinject or otherwise examine the sample more carefully. If the IS comes out before the analyte of interest, there is nothing to assure you that later peaks were eluted under acceptable conditions. It is also convenient if the IS is eluted near the analyte. We’ll discuss other secondary benefits of the IS in a later blog.

We want the internal standard to be stable. That doesn’t mean that it needs to be unchanged forever, but certainly it should be sufficiently stable that it doesn’t break down, react, or otherwise change during the analysis, because this would make it impossible to depend on the consistency of the IS peak, a necessary condition of internal standard calibration. You’d like to be able to reinject a sample if the autosampler failed in the middle of an overnight run without worrying if the IS was still OK.

The requirement that the IS be available in pure form is a bit flexible. Perhaps it would be better stated that no impurities in the IS should be present that might interfere with sample analysis. This is a special problem for degradant or impurities methods, where many small peaks may be present – we don’t want to confuse them with impurities in the IS! So the IS will be much easier to use the higher its purity is.

In order to be useful, the internal standard should have compatible detector response. For example, if fluorescence detection is being used, the IS should also fluoresce. And you would like the molar response for the IS to be similar to the analyte so that you don’t have to add excessive or miniscule amounts of IS to each sample.

It is commonly stated that the internal standard should have a structure similar to the analyte. This really isn’t necessary. If you are analysing metabolites of a pesticide in fish fat, you could use benzene as the IS if it worked. However, if you meet the other requirements of the IS listed above, especially something that elutes in the same region of the chromatogram and has similar detector response, this usually will mean that the IS will have a structure similar to the analyte.