Q: I use trifluoroacetic acid (TFA) to adjust the aqueous portion of my HPLC mobile phase to pH 2.5. Even with careful pH adjustment, I see changes in retention when I prepare each new batch of mobile phase, such as shown in Figure 1. Retention seems to be consistent within a batch, but batch-to-batch variability concerns me. Can you shed any light on this problem?

A: TFA is widely used as a mobile phase additive in the HPLC separation of biological molecules, such as proteins and peptides, because it acts as an ion-pairing reagent and equilibrates quickly so that it can be used with gradient elution. The standard recipe is to put 0.1% TFA in water for the A-solvent and 0.1% TFA in acetonitrile (ACN) for the B-solvent.

The volatility of TFA also has made it a favourite additive for LC-MS applications. But formic acid is favoured for LC-MS in most cases now, because it was found that TFA can suppress ionization of analyte molecules. 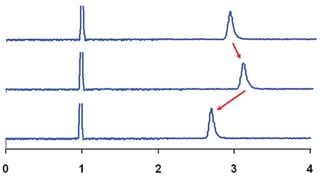 These popular uses of TFA may lull us into thinking that TFA can be used just like any other acid in mobile-phase preparation. But be cautious! When the mobile phase pH is adjusted by titrating with an acid, as you have done, the amount of acid required to obtain a certain pH will depend on the pKa of the acid and the pH of the water. If pH is the only concern, it is likely that small variations in the amount of added acid will not be very important, but if the acid is contributing other characteristics to the chromatographic system, the variation may be quite important. The pKa of TFA is in the pH 0.2-0.5 region, depending on the reference you select. 0.1% TFA gives a pH of about 1.8-2.0. This means that for pH 2.5, you would add less than 0.1% TFA. Now remember that TFA also can act as an ion-pairing reagent, as well. Retention in ion pairing can be quite sensitive to ion-pairing-reagent concentration. So you can see that if the amount of TFA needed to adjust the pH to 2.5 varied from batch to batch because the pH of the water was different, the amount of ion-pairing reagent present would also be different. I suspect that this is the source of the retention-time variation that you observe.

How do we test this hypothesis? I would first figure out how much TFA you normally add to get pH 2.5. This would be done by titrating to pH 2.5 in the normal way, but use a calibrated buret or volumetric pipette to measure how much TFA it takes to get 1-L of water to pH 2.5. Then make a series of three concentrations of TFA-water. One would be the solution you just made. Make another at 0.1% TFA and a third half way between the two concentrations. Run each of these and determine the retention time of your analyte. I suspect you’ll see that the retention time correlates with the TFA concentration. With this knowledge, you can then determine the concentration needed to obtain the desired retention time. Use this concentration of TFA in your recipe for mobile-phase formulation instead of a specific pH and you should get more consistent batch-to-batch retention-time reproducibility.

If TFA is not acting as an ion-pairing reagent for your sample and it is more important to obtain a pH-2.5 mobile phase, you might be better to use another acid. I would try formic acid. 0.1% formic acid should give pH≈2.7, so a little bit more than 0.1% should drop the pH to the target value of pH-2.5. As in the TFA strategy above, you should get more consistent results if you use a constant amount of acid rather than trying to adjust the pH using acid. If a specific pH is what you need, a buffer would be a better choice. See the next instalment of John Dolan’s HPLC Solutions for more information on the use of buffers.