The sensitivity of a chromatographic method might be described by its limit of detection (LOD). LOD is usually defined as the minimum detectable amount or concentration of a component that can be reliably detected using a given analytical method. This article provides an overview on the key factors to be considered and controlled for an optimal sensitivity. Read this article from Issue 9 of the Analytix Reporter, produced by Merck, to find out more. 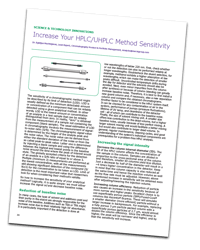 The sensitivity of a chromatographic method might be described by its limit of detection (LOD). LOD is usually defined as the minimum detectable amount or concentration of a component that can be reliably detected using a given analytical method. In other words, LOD is the lowest amount or concentration of an analyte in a test sample that can be reliably distinguished from zero. In reality, “zero” is obtained from the measurement of a sample not containing the component (blank sample). The usual estimation of LOD in chromatography involves the measurement of signal to-noise ratio (S/N). The chromatographic signal value is determined by the height of the analyte peak and the noise value. The noise value can be derived from either the standard deviation of the noise or from the so called peak-to-peak value. Latter one is determined by injecting a blank sample and using the difference between the highest and lowest points in the baseline noise around the time where the peak of interest would elute. The globally accepted criteria for the detection of an analyte is a S/N ratio of equal to or above 3. Multiple (minimum 3) measurements are performed at the lowest concentration, with all the measurements still showing significant detection of the compound (S/N≥3) for the concentration to be taken as LOD. Limit of detection is the most important value that researchers look for when considering their method’s validity. So how to increase the sensitivity of your analytical method? Logically, it is quite simple: we must either increase the signal or/and decrease baseline noise.