Looking for more information on carbon adsorbents for gas chromatography (GC) and sample preparation? If so, read on... 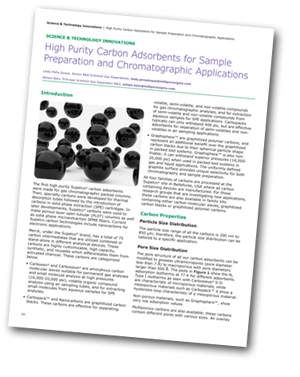 The first high purity Supelco® carbon adsorbents were made for gas chromatographic packed columns. Then, specialty carbons were developed for thermal desorption tubes followed by the introduction of carbons in solid phase extraction (SPE) cartridges. In later developments, Supelco carbons were used to make porous layer open tubular (PLOT) columns as well as solid phase microextraction SPME fibers. Current Supelco carbon technologies include nanocarbons for electronic applications. Merck, under the Supelco brand, has a total of 75 carbon intermediates that are utilized combined or stand-alone in different analytical devices. These carbons are highly customizable, high capacity, synthetic, and reusable which differentiates them from activated charcoal. These carbons are categorized below.

All four families of carbons are processed at the Supelco site in Bellefonte, USA where all carbon containing devices are manufactured. For those research groups that are investigating new applications, these carbons are also available in family kits containing either carbon molecular sieves, graphitized carbon blacks or graphitized polymer carbons.

To find out more on these carbon families, particularly in terms of particle- and pore-size distribution, sample preparation, and GC applcations, click on the button below: