Pesticides in food matrices can be sensitive to inlet conditions, including the type of barrier in the liner, whether this is glass wool, dimples, or sintered frit. This application note describes a multiresidue pesticide analysis method using gas chromatography/tandem quadrupole mass spectrometry (GC/MS/MS) to evaluate the efficacy of the Agilent Ultra Inert splitless sintered glass frit liner. 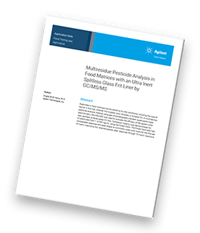 Introduction
Pesticides are sensitive to active sites in GC/MS/MS systems, which makes an inert flowpath critical; however, some food matrices can alter the inertness of the flowpath. Previous studies have shown that matrix-matched calibration curves and liners with barriers, such as glass wool, prolong column and analysis lifetime. Inlet liners packed with glass wool are often used to provide a site for volatilization, and act as a barrier for collecting nonvolatile matrix compounds. Glass wool, however, can also introduce active sites, since an irregular surface may not be fully deactivated or new active sites can open at breakage points of the glass wool. An alternative to glass wool is a sintered glass frit liner, which also provides a barrier and volatilization site without the risk of wool breakage or movement in the liner.

Results and Discussion
This study demonstrates the linearity and peak consistency of the splitless fritted liner for pesticide analysis. A calibration curve using two-layer sandwich injections of each standard was generated for each matrix.

Conclusion
The Agilent Ultra Inert splitless fritted liner is a suitable choice for testing pesticides in food by GC/MS/MS. The fritted liners successfully achieved calibration from 1 to 500 ng/mL with average calibration coefficients (R2) of 0.996 across 22 targeted pesticides. Fritted liners provided similar responses to the splitless wool liners, but tended to have better retention of peak area with increased matrix injections across 70 matrix-matched injections than the wool liners. There was excellent liner repeatability and reproducibility with
% RSD values below 16% for all fritted liners, and below 20% for wool B liners, indicating consistent deactivation and interaction of pesticides with the liners.