UCT has produced an application note outlining a QuEChERS extraction procedure for the analysis of 5 mycotoxins and 47 pesticides in cannabis. 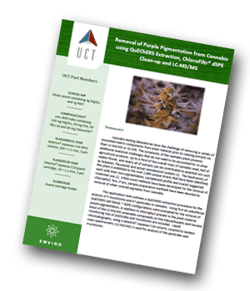 Summary
Cannabis testing laboratories have the challenge of removing a variety of unwanted matrix components from plant material prior to running extracts on their LC-MS/MS or GC-MS. The complexity of the cannabis plant presents additional analytical challenges that do not need to be accounted for in other agricultural products. Up to a third of the overall mass of cannabis seed, half of usable flower, and nearly all of extracts can be contributed to essential oils such as terpenes, flavonoids and actual cannabinoid content. The biodiversity of this plant is exhibited in the over 2,000 unique strains that have been identified, each with their own pigmentation, cannabinoid profile and overall suggested medicinal use. While novel methods have been developed for the removal of chlorophyll, few, if any, sample preparation methods have been devoted to removal of other colored pigments from cannabis.

Using first an unbuffered QuEChERS salt blend, 7 dSPE configurations were evaluated for the removal of purple pigmentation, in addition to chlorophyll present in the plant material.

Discussion
A combination of MgSO4, C18, PSA and Chlorofiltr® (Blend A) allowed for the most sample clean up, without loss of pesticides and mycotoxins, for all cannabis samples tested. Average recovery of the 48 pesticides and five mycotoxins using the selected dSPE blend was 75.6% were as the average recovery when including GCB instead of Chlorofiltr® was 67.6%. Regardless of the sample’s original pigmentation, this blend successfully removed both chlorophyll and purple hues from all strains tested.

Conclusion
The sample preparation technique selected by a cannabis lab for their plant material must be capable of removing both chlorophyll and other hues of pigmentation. Using a dSPE blend that contains UCT’s novel Chlorofiltr®, in conjunction with PSA, C18 and MgSO4, both green and purple coloration is successfully removed from various strains of cannabis. Recovery of both pesticides and mycotoxins are maximized using the above blend, without loss of planar pesticides. Compared to typical dSPE products that utilized GCB instead of Chlorofiltr®, the blend selected has proven to be optimal for troublesome compounds that are found on a variety of state monitoring lists.