In this study, an LC/MS/MS direct sample injection method was developed, and the results indicate that this simple LC/MS/MS workflow provides an excellent sensitivity and specificity for the analysis of PFASs in drinking and surface water samples. 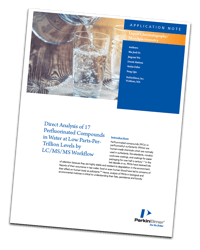 Perfluorinated compounds (PFCs) or perfluoroalkyl surfactants (PFASs) are human-made chemicals which are normally used in surfactants, fire-retardants, nonstick cookware coatings, and coatings for paper packaging for over half a century. In the last decade or so, PFASs have received lots
of attention because they are highly stable and resistant to degradation in the environment. Reports of their occurrence in tap water, food or even human blood have led to concerns of their effect on human body as pollutants.3-6 Hence, analysis of PFASs in biological and environmental matrices is critical to understanding their fate, persistence and toxicity.

The use of solid phase extraction (SPE) procedures before LC/MS/MS analysis is one of the most popular methods for PFASs extraction from aqueous environmental matrices. In this study, a LC/MS/MS direct sample injection method was developed, and the results indicate that this simple LC/MS/MS workflow provides an excellent sensitivity and specificity for the analysis of PFASs in drinking and surface water samples.

Conclusion
A simple and robust LC/MS/MS method for PFASs analysis in drinking or surface water at low ng/L (or ppt) level was developed by coupling a LX-50 UHPLC system to a QSight 220 triple quadrupole mass spectrometer. This method can be applied for determination of PFASs, with LOQs below the limits set by many regulatory boards.

The time-managed-MRM module in the Simplicity software was effectively used in this study for monitoring 17 PFASs in drinking or surface water samples. This feature simplified the optimization of the MS method on optimum dwell time for monitoring many analytes in samples.

Good linearity of calibration curves (with R2>0.99) were obtained from ng/L to μg/L (or ppt to ppb) level for most of the 17 PFASs with LOQs of 1 to 63 ng/L (or ppt) depending on the analyte.

For several real water samples analyzed, it was found that at least two of the 17 PFASs were positively detected except for a commercially available bottled drinking water sample