This application note demonstrates how the combination of UV and a single quadrupole mass detector is a powerful tool for (active pharmaceutical ingredient) API analysis in early stages of development, enabling confirmation of expected impurities. 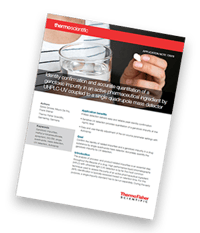 Introduction
The analysis of process- and product-related impurities is an essential step throughout the lifecycle of a drug. High performance liquid chromatography (HPLC) with ultraviolet light (UV) detection is by far the most common technique used to assess the purity of an API. Identification is typically assessed based on retention time. For this purpose, a single impurity standard has to be run separately. During the early drug development stages, impurity standards are often not available, and the identity of peaks cannot easily be determined.

Genotoxic impurities are a special group of impurities that pose a greater risk to patient health, since they are carcinogenic. The genotoxic impurities identified as potential contaminants of the drug must be monitored and accurately quantified according to rules that are stricter than for other impurities. The United States Food and Drug Administration (U.S. FDA) as well as the European Medicines Agency (EMEA) have established a threshold of toxicological concern (TTC) of 1.5 μg/day for long-term treatments with the drug product.

Results and Discussion
The analysis of the API sample (aprepitant I) showed several peaks in the UV chromatogram. SIM scans were performed to confirm the presence of expected impurities and four impurities were confirmed by SIM scans including the genotoxic one, methyl-TSF.

Conclusion
The combination of UV and a single quadrupole mass detector was shown to be a powerful tool for API analysis in early stages of development, enabling confirmation of expected impurities.