Capillary Conditioning — The Foundation of Precision in capillary electrophoresis (CE)

In previous issues we saw the importance of a controlled, constant electro-osmotic flow (EOF) for proper precision. In this issue we will therefore look into the different strategies for capillary conditioning, as a good conditioning procedure is crucial to a stable EOF.

A Fused Silica Capillary is Not an Inert Open Tube
Fused silica is the most commonly used material for capillaries in capillary electrophoresis (CE). We discussed previously that although we think of fused silica as a rather inert tube to perform our separation in, in fact the use of silica results in an electro-osmotic flow. The electro-osmotic flow is a “chemical” flow, not a constant flow controlled by a pump as in LC. The silanol groups from the capillary wall deprotonate depending on the pH of the background electrolyte BGE. Cations from the BGE then form a so-called double layer at the wall and when the voltage is applied, create a flow to the cathode, the negative electrode. It is thus easy to understand that anything happening to the wall will cause fluctuations in the EOF and improper conditioning results in high variability in the migration times of analytes. On top of this, some analytes show quite strong solute — wall interactions that can cause extensive band broadening. This is all the more reason to look into the conditioning of the capillary wall.

Treatment of a New Capillary
Although most labs have empirically found procedures for capillary conditioning and these procedures can vary distinctively between each other, there is general consensus that new bare fused silica capillaries should be treated with sodium hydroxide. Usual procedures work with 0.1–1 M NaOH with rinses/flushes for 20 min–1 h. This is then followed by a flush with water and the method’s background electrolyte (BGE).

Already in the early 1990s the group of Khaledi published an extensive study on the conditioning of a capillary (1). The group of Wätzig also did some intensive studies and looked at the inner surface of CE capillaries with X-ray photoelectron spectroscopy (e.g., 2). Both showed the importance of an NaOH wash of a new capillary. The sodium hydroxide treatment gives a controlled surface hydroxylation and might also remove other debris left from the production of the capillary. Wätzig et al. furthermore showed the presence of organic material on the capillary wall of a new capillary. This was mostly removed with an NaOH flush. Sometimes a longer wash than described above might be needed. If the intended pH range of the method is in the interval where the EOF varies strongly with the pH, i.e. pH 4–7, a longer rinse improves precision (2).

Do not wash the capillary with an organic solvent directly after the NaOH wash as this can cause anomalous behaviour of retention time and current (1).

For coated capillaries, check with the vendor’s instruction, as some coatings are unstable in NaOH. For non-aqueous CE (NACE), avoid flushing with aqueous solvents.

The last one especially is often forgotten. Since the capillary is just an open tube, we can flush out anything that would migrate after our components of interest have migrated out.

Preconditioning is Part of Method Development
There are many different kinds of preconditioning steps performed. In the sidebar is an overview of steps to be considered. It is important to realize though that each application requires its own preconditioning procedure and that the investigation of appropriate steps should be part of method development. The best way to approach that is by starting simple. Always put in a BGE rinse before injecting the sample. Depending on its composition, pH and the samples you are working with, it might be sufficient to do just that. If so, do not spoil the wall equilibrium by adding unnecessary steps. If not, the preconditioning procedure can be increased step by step, depending on the issues met.

Not all steps described in the sidebar are rinsing steps, as we have found in practice that simple steps such as dipping the capillary in water or BGE, or applying (reversed) voltage can also greatly improve method performance. The latter also reduces carry-over. 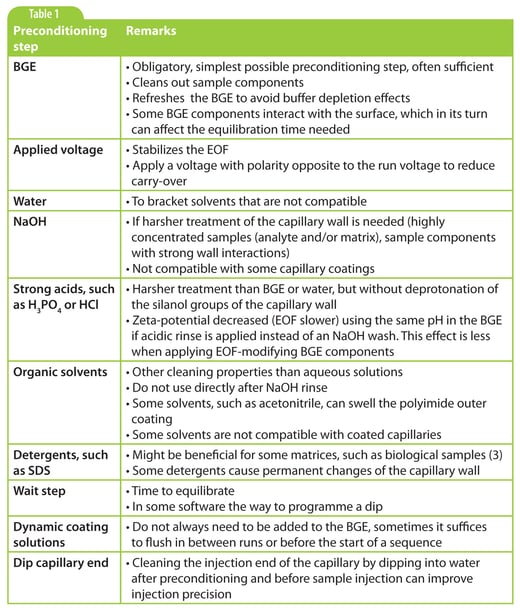 Static adsorbed coatings such as SMIL are becoming more and more popular for active EOF control and sample adsorption prevention. These coatings have shown to be very stable and effective. If properly applied, these coatings are stable for many runs, and it is not needed to have the coating polymer present in the BGE. Therefore, these kind of coatings are usually applied by rinsing the capillary with subsequent solutions of the coating components at the start of the day as part of the pre-sequence conditioning. Some of them are even stable for several days and then just a BGE pre-sequence rinse might suffice.