An Optimized Protocol for Peptide Mapping of Therapeutic Monoclonal Antibodies

Conventional protein digestion procedures used in peptide mapping are lengthy and introduce significant amounts of oxidation and deamidation artifacts. In this article, from Issue 11 of the Analytix Reporter, produced by Merck, the optimized protocol shows a shorter incubation time, less artifact formation, and an efficient separation of tryptic digests on a BIOshell™ A160 Peptide C18 column. 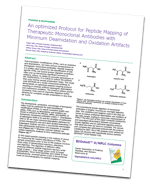 Abstract
Post-translation modifications (PTM), such as oxidation and deamidation, can have serious consequences on therapeutic monoclonal antibodies. Peptide mapping is a widely used method for the identification of sitespecific PTMs, but typical protein digestion workflows often end up introducing significant amounts of artifacts. Hence, to obtain an accurate assessment of the modifications, it is critical to reduce the artifacts that occur during sample preparation steps. This study used NISTmAb as a model monoclonal antibody to demonstrate an optimized peptide mapping protocol resulting in minimal artificial asparagine deamidation and methionine oxidation. The protocol utilizes shorter incubation times and an improved digestion buffer, allowing for complete sample preparation in less than six hours.

Introduction
The development, production, and storage of therapeutic mAbs must be monitored for post-translational
modifications (PTMs), to assure consistent quality and safety. PTMs such as deamidation and oxidation are
known to influence the efficacy, safety, and stability of therapeutic monoclonal antibodies (mAb).

Results and Discussion
Peptide mapping using LC-MS has become a routine analysis in the development and manufacture of
therapeutic mAbs. Traditional sample preparation procedures used prior to LC-MS are often cumbersome.
These procedures generally involve chemical denaturation, reduction and alkylation, buffer exchange, and overnight protease digestion of the protein sample at elevated pH and temperature. Asparagine deamidation and methionine oxidation take place during these various steps, the extent of which depends on the conditions such as reagents used, ionic strength, temperature, pH, incubation time, digestion buffer, and presence of trace metals (in the case of methionine oxidation). A simpler, shorter method with minimal artifacts is certainly desired to obtain accurate endogenous levels of deamidation and oxidation.

Conclusions
The optimized protocol gave significantly lower levels of Asn deamidation compared to the conventional
protocol, particularly at two sites, HC:N387 (over 40% lower) and HC:N318 (over 20% lower). The levels of oxidation (<5%) and deamidation (1.5 %) were comparable with the NIST protocol. In addition, more missed cleavage peptides were observed with the NIST protocol (35%) compared to the optimized protocol (16%). The optimized protocol also offers the advantage of allowing complete digestion in less than 6 hours, with minimal deamidation and oxidation artifacts. The use of two BIOshell™ A160 Peptide C18 (15 cm) columns in series allowed the successful separation of peptides in the tryptic digestion.