Previously we discussed the fundamental issue of metal adduct ion formation in electrospray LC/MS including method development strategies for dealing with adduct ions. This article will examine a real-world application which employs these strategies. A few years ago our laboratory developed a method for penicillin G by electrospray LC/MS. 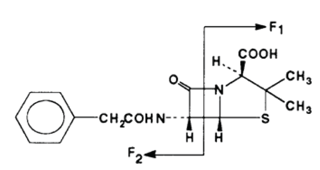 The molecular mass of penicillin G is 334 Da. The molecule contains two amides and a carboxylic acid moiety, therefore, both positive and negative ion methods may work well. From the known fragmentation pattern shown in the figure it is clear that either nitrogen may be protonated because both fragments F1 and F2 in Figure 1 produce intense peaks in positive ion MS/MS. With two possible sites for protonation we thought positive ion may be the better choice and decided to begin our investigation there.

Table 1: Results of method development experiments for Penicillin. *All results normalized to this peak height

Unexpected Initial Results
We expected to find the protonated molecule ([M+H]+) at m /z 335 and, knowing that our standard was a potassium salt, we also expected the potassium adduct ion at m /z  373. Upon running the sample, we obtained the spectrum shown in Figure 2. The expected peak at 335 was completely absent, however a very intense peak at 373 was noted and identified as the potassium adduct ion peak and confirmed based on its isotope peak pattern (see below for further description of isotope peaks).

A second very intense peak was present at m /z  411. This m /z  value represents M+77. It is theoretically possible to have a double-charged ion of penicillin G because two nitrogens are available as charge loci. Two potassiums though would result in a mass of 412 (M+78), not 411. More importantly, a doubly potassiated ion would be a double-charge ion ([M+2K]+2) and would thus show up in the spectrum at m /z  412÷2 or 206.

Our next step was to examine the 411 peak in more detail. Examination of Figure 3 shows there is a very intense X+2 peak, i.e., a peak whose m /z  value is 2 units higher than the main peak at 411. This indicates the presence in the ion of elements which have a good abundance of a naturally occurring stable isotope whose mass is two mass units greater than the integer nominal mass of the element. Common elements of this type seen in electrospray LC/MS are oxygen, chlorine, bromine, sulfur, and potassium. Sulfur and oxygen are known to be present in penicillin G but cannot account for all of the X+2 peak intensity. However, if two potassium atoms are present then the intensity of this peak can be explained.
Having already eliminated the possibility of a double-charge metal adduct ion we were left with only one conclusion and that is a potassium adduct ion of a potassium salt. This ion takes the form [M+2K-H]+. One potassium displaces the acidic proton on the carboxylic acid moiety of the penicillin G and the other adducts to one of the nitrogens. Thus the total mass is M+2K-H= 411 and the resultant charge is +1.

We have identified both potassium adduct ion species but this method is not acceptable for quantitative analysis because we are not controlling the ionization process. If one patient sample has more potassium compared with another quantitative results may vary because of the efficiency of ion formation rather than actual physical amount of the drug in the sample. Our next step was to take the two approaches described in last month’s column: (1) reduce the pH with an organic acid to provide a great excess of protons and thereby drive formation of the protonated molecule, and (2) modify the mobile phase with potassium acetate to drive formation of only one metal adduct ion species.

Adduct ion gives the best result:
Table 1 summarizes our observations. The first column shows the symbol for each ion type and the expected m /z  value. The remaining three columns summarize the experimental results. The first of these shows the results with no mobile phase additives, i.e. just acetonitrile/water. These results are also shown in Figure 2 as discussed above. The second column shows the result of lowering the pH of the mobile phase with 0.2% formic acid. As expected, the [M+H]+ ion is the dominant species with only minimal amounts of the two potassium adducts present and the intensity of the [M+H]+ is greater than either peak in the first analysis. This may, in fact, be an acceptable quantitative method depending on the required limits-of-detection (LOD). 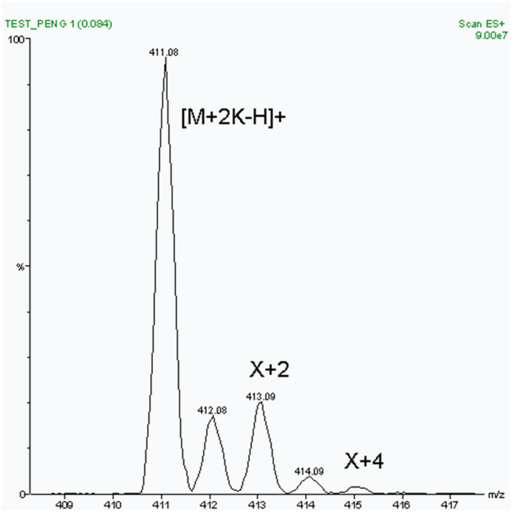 The third column shows the results after addition of 50 μM potassium acetate to the mobile phase. Again, we have successfully forced nearly all of the ion current into a single ion type, in this case the [M+2K-H]+. Not only that, but we observe that this ion gives us the most intense signal (all results in the table are normalized to this peak height). As a result, the method using ACN/water with 50 μM potassium acetate is the preferred method and [M+2K-H]+ is chosen as our quantitation ion.

We initially believed that [M+2K-H]+ is a very unusual ion. However, since then we have encountered this ion in many different applications such as peptide and protein analysis and drug synthesis. Any analyte compound containing an amine (or amide), and a carboxylic acid functional group has the potential to form a metal adduct ion salt. Other possible forms of this ion, namely [M+2Na-H]+ (m/z M+45), and [M+Na+K-H]+ (m /z M+61), have also been observed in our lab.