The term “adduct ion” is a popular term among liquid chromatography/mass spectrometry (LC/MS) users to describe ions formed by adduction of alkali metal ions to an analyte molecule in positive ion analysis. However, the well-informed user should be aware that “adduct ion” correctly refers to any ion formed by adduction of an ionic species to a molecule. Therefore, the common protonated molecule or [M+H]+ is also properly called an adduct ion. In this article we will be discussing specifically the adduction of alkali metal ions (Na, K), to analyte molecules and will therefore use the term “metal adduct ion” to refer to these species.

The most commonly observed metal adduct ions in positive-ion electrospray analyses are single-charge sodium and potassium adducts, symbolized [M+Na]+ and [M+K]+ respectively. However, ions in electrospray can form with many other adducting species, e.g., ammonium ions [M+NH4]+; metal ions abstracted from the electrospray needle at high voltages, for example, [M+Fe]+; adducted solvent molecules such as [M+H+H2O]+; and, in negative-ion analysis, negative-charged adducting species like [M+Cl]–. Adduct species other than protonated molecules may also occur in atmospheric pressure chemical ionization (APCI) interfaces. Adduct ions in APCI must be volatile which means the ammonium, chloride, and water adducts described above can occur in APCI but the metal adduct ions cannot.

How can I recognize these ions? 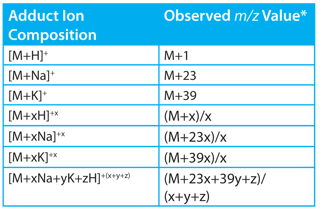 Table 1: Common Adduct Ions in Electrospray *M is the molecular mass of the analyte molecule.

Table 1 illustrates common adduct ion species seen in electrospray and their corresponding m /z values. The first three rows show the most common single charge species.
Figure 1 shows the analysis of a single analyte with a molecular mass of 212 u in the presence of sodium and potassium ions. The peak at m /z  213 represents the protonated molecule [M+H]+. The peak at 22 m/z units above the protonated molecule is the sodium adduct and the one 38 units above is the potassium adduct. Analysts who routinely use electrospray must train their eye to look for one or both of these metal adduct species when developing LC/MS methods. In some cases, the protonated molecule may be completely absent and only metal adduct species are present. We will discuss a real-world example of this problem in next month’s instalment of MS Solutions.

The last four rows of Table 1 illustrate variations on multiple-charge ions. In these cases note that each adducting species contributes one positive charge and the mass spectral peak shows up at an m/z value corresponding to the mass of the adduct species divided by the total number of charges on the ion. Highly charged species, such as intact polypeptides, are characterized by charge heterogeneity, i.e., the mass spectrum shows multiple peaks each representing a different charge state. Charge heterogeneity in the presence of alkali metal ions can lead to a completely unusable mass spectrum in which there is a peak at nearly every mass-to-charge ratio.

For this and other reasons it is important for analysts to understand the source of metal adduct ions and to know how to control their formation. 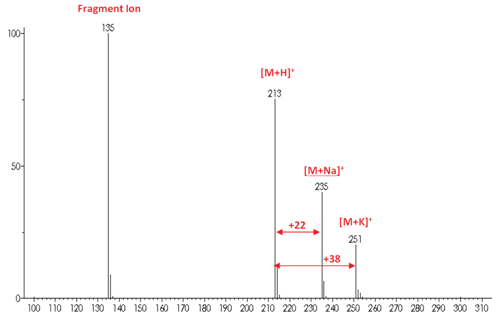 Why me?
The first question many users ask is “Why do I see these ions?” Analysts are baffled by the fact that they have not added any sodium- or potassium-containing reagents to their sample or mobile phase and yet they still see a significant amount of ion current corresponding to the m /z  value of these adduct ions.

The most common source of this metal contamination is laboratory glassware. Various salts are used in the glass manufacturing process and can leach from the glass in the presence of aqueous solvents. For this reason, plasticware is often substituted for glass in the electrospray laboratory. Plasticizers and other organic molecules may leach from plasticware but are generally less of a problem than metal ion adducts because they occur at known and fixed m /z  values and can therefore be discounted when interpreting mass spectra.

Another common source of sodium and potassium contamination is the analysts themselves. Simply touching lab ware with an ungloved hand can transfer enough salt to cause a significant appearance of metal adduct ions.

Biological samples, of course, often have a high endogenous concentration of various salts while other salts may be added during the sample preparation process. Clinical patient samples such as urines or plasmas will vary widely in salt concentration and the greater and lesser degree of metal adduct ion formation from one sample to another can lead to inaccurate quantitative results.

Many existing HPLC methods use sodium- or potassium-containing reagents for pH control or ion-pairing. It is important to modify these methods to eliminate these metal ion salts when moving the method to LC/MS.

What can I do about it?
Regardless of the source, it is important to understand and control formation of metal adduct ions particularly for quantitative applications. There are two strategies which work reliably for dealing with these ions:

(1) Lower the pH: The preferred method for dealing with unwanted alkali metal adducts is to lower the pH of the mobile phase with a simple organic acid such as formic acid. This provides an excess of protons relative to metal ions which in turn drives all or a major portion of the ion formation to the protonated molecule [M+H]+. Compared with an unmodified mobile phase, lowering the pH should improve ionization efficiency and thus provide a better LOD for the protonated molecule.

(2) Add potassium or sodium acetate to the mobile phase. Just as the large excess of protons in the previous example drives formation of protonated species, the large excess of metal ion drives the nearly exclusive formation of the metal adduct ion species. You should go to this strategy if approach (1) does not eliminate most of the metal adduct species. You may also find that response is better (improved LOD), for metal adduct ions than for protonated species although this can only be determined by experiment. Note that it is important to use acetates or other volatile reagents. Involatile salts will precipitate in the interface and may plug the entrance to the MS.