by Separation Science in collaboration with Agilent

Due to large numbers of samples and the associated analysis time for each, using mass spectrometry (MS) as a primary screening technique can be a long, tedious process. This application note presents a modified Agilent RapidFire high‑throughput MS system (RapidFire) that bypasses SPE desalting and enables a sub-2.5 second sample throughput rate, making the analysis of 35,000 samples a day possible. 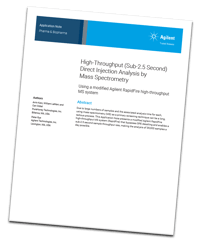 The role of MS in early drug discovery, and especially in functional biochemical and binding assays, is well established. However, even fast techniques such as UHPLC or SPE/MS face challenges when primary screens of several hundreds of thousands of compounds need to be performed. With an eight seconds per sample throughput, a RapidFire can sample, desalt, and analyze 10,000 samples in 24 hours. However, a large screen of several hundreds of thousands of compounds still requires many weeks of effort.

The RapidFire has been modified to bypass the SPE desalting step, and inject samples directly into the MS at a throughput of less than 2.5 seconds per sample. This modified system enables the analysis of 35,000 samples, without cleanup, in 24 hours.

Experimental conditions can be found by downloading the full application note.

The RapidFire was modified to bypass the SPE cartridge and perform direct injection of samples. This modification resulted in increased throughput, and could easily sustain a cycle time of less than 2.5 seconds per sample, representing a three to five-fold improvement over standard configuration analyses. The modified system also demonstrated a broad and linear concentration response, excellent reproducibility, and near perfect correlation with data acquired in standard mode. The RapidFire could be interconverted in less than 10 minutes, allowing users to balance the throughput and sensitivity requirements of their specific screens.

Though not described in detail here, the modified system can be beneficial in ways beyond increased throughput. As one example, because the sample composition is not subjected to SPE enrichment (which can affect the relative concentrations of analytes delivered to the MS), the modified system enables the analysis of diverse analyte panels in each sample. As another example, because the bind/elute process has been circumvented, the modified system allows the analysis of samples that are not amenable to SPE. That is, if a suitable SPE packing material cannot be identified, or if the sample matrix (high organic content, nonspecific binders, and so on) spoils the SPE binding process.