Many analysts never consider anything beyond the electrospray interface for LC/MS. Electrospray is undeniably a very flexible technique. It works well for macromolecules as well as small molecules, positive and negative ion mode, and is a great choice for thermally labile compounds. However, it is not the optimum interface for all organic molecules and, in fact, does not work at all for some classes of compounds. In this article we will examine how the characteristics of your analyte molecule will help you select from among the principle LC/MS interfaces: (1) electrospray, (2) atmospheric pressure chemical ionization (APCI), and (3) atmospheric pressure photoionization (APPI).

The first step in method development for LC/MS is to determine as much as you can about the analyte you will be working with. This information should include molecular mass, structure (or at least elemental composition), functional groups, pk value(s), and thermal lability. With this information in hand you can then decide which LC/MS interfaces are most likely to give good results. There is no substitute for actually doing the experiments but the guidelines in this article will get you started in the right direction.

Electrospray
Electrospray works by evaporating ions from solution at atmospheric pressure. A high voltage is applied from the LC inlet capillary across the atmospheric pressure region of the interface to the inlet of the first vacuum region of the MS. This high voltage induces formation of the “Taylor cone” at the exit of the LC capillary and further causes disruption of the cone into droplets. It is from these droplets that analyte ions are evaporated.

You will note that I did not say ions are formed in the interface only that they are evaporated. The ions are already formed in solution (i.e. the HPLC mobile phase), prior to introduction to the electrospray interface. It is this fact which leads us to the most important characteristic of a successful electrospray analyte molecule—it must be capable of forming an ion in solution. Typically this means proton adduction to basic functional groups to form positive ions and abstraction of protons from acidic functional groups to form negative ions:

Does this mean that electrospray is the first choice for amines and organic acids? Absolutely NOT! In fact, the only reason to choose the electrospray interface is if the amine or organic acid is (1) thermally labile and/or (2) of high molecular mass (i.e. > ~1000 u). Amino acids, peptides, and proteins are ideal analytes for electrospray. Nucleic acids and industrial polymers with ionic functional groups are also good choices for analysis with electrospray. Small molecules which exhibit thermal lability, as many pharmaceutical preparations and their metabolites do, are also best run with electrospray. Electrospray is also useful for high mass or thermally labile alcohols and phenols. These can be run in negative ion mode due to the fact that the hydroxyl proton has some acidic character. 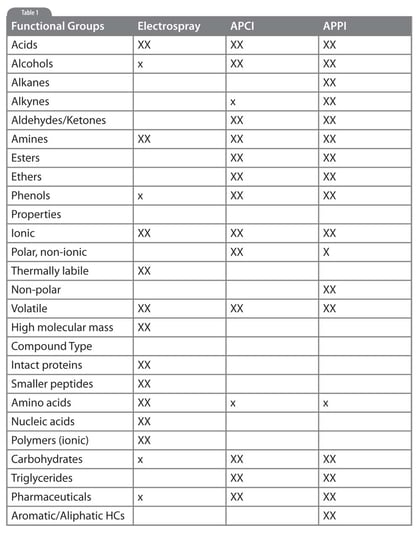 Table 1: Selecting LC/MS Interfaces for Different Analytes. XX: primary method, likely to give good results. x: secondary choice, may give satisfactory results. blank: will not work for this application.

Atmospheric Pressure Chemical Ionization
Ion formation in APCI takes place in the gas phase in the atmospheric pressure region of the interface. APCI is often called solvent-mediated chemical ionization because the HPLC solvent acts as the chemical ionization reagent. HPLC solvent, analyte molecule(s), and matrix constituents, are immediately vaporized into the gas phase upon entering the atmospheric pressure region. This requires a high level of thermal energy a→nd hence thermally labile compounds cannot be analyzed by APCI. Protonated or deprotonated solvent clusters are formed through a series of reactions initiated by the solvent vapor passing through the ionized gas at the tip of the corona discharge needle. These ionized solvent clusters act as proton donors/acceptors in gas-phase acid-base chemical ionization reactions. The following equations show these reactions involving water clusters:

The ionization process is more energetic in APCI than in electrospray. As a result, it is possible to ionize polar organic compounds that do not readily form ions in solution. In addition to amines and acids, APCI can be used to analyze ketones, aldehydes, ethers, esters, alcohols, and phenols.

APCI is far more forgiving than electrospray in terms of the number of parameters the analyst must understand (for a discussion of some of these parameters see MS Solutions 2, 3, 4, and 7), and it is far less susceptible to ion suppression effects. Due to this ease of use and the wide range of organic compounds which it can ionize, APCI is the method of choice for small polar molecules using reversed-phase HPLC and where thermal lability is not a problem.

Atmospheric Pressure Photoionization
APPI is in nearly identical to APCI in terms of the compound types it can ionize and difficulties with thermal lability. The interface itself is also identical except for the corona discharge needle. After the solvent and sample are volatilized, a vacuum UV lamp provides a photon flux to initiate the ionization sequence. The photon energy is insufficient to directly ionize atmospheric gases as the corona discharge does in APCI. Instead, we must introduce a gas-phase “dopant” (typically toluene or acetone), which undergoes ionization to form an odd-electron ion as follows:

From this point a couple of different mechanisms are used in APPI for sample ionization. One mechanism is used with reversed-phase chromatography and results in gas-phase chemical ionization like that of APCI (only positive ion formation is shown):

Analyte ions may also be formed by direct electron transfer from dopant to analyte. In this case, the result is a molecular ion (odd-electron ion) of the analyte:

Because of this ionization mechanism, APPI is the only LC/MS interface which can be used with normal phase chromatography and non-polar analytes such as straight chain hydrocarbons and polynuclear aromatics. This is, in fact, the one feature that makes APPI distinctly different from APCI.

The table accompanying this article summarizes what we have discussed. Analytes are presented along the vertical axis in terms of functional groups, physical properties and compound class. For each interface type we show a large X if that interface is likely to give good results, a small x if the interface may work acceptably well under certain conditions, and left blank if that interface is unlikely to provide satisfactory results. Use this table as a starting point for method development but realize many more considerations, and actual experimental results, go into the final method selection.