by Separation Science in collaboration with Shodex

HILIC separation is based on hydrophilic interaction. HILIC uses the same solvent as with reserved-phase chromatography (acetonitrile / water / methanol and others). The stationary phase is highly polar. Using the higher polarity mobile phase causes a faster elution. It is applicable for the analysis of high polar substances. As a functional group amino, carboxyl, quaternary ammonium or diol groups are used. These columns are often used for sugar analysis. The stationary phase of the HILIC columns can be silica based or polymer based. The advantages of polymer-based columns compared to silica ones are mentioned, such as chemical stability full pH-range and many more.

Polyvinylalcohol is mainly used for Shodex HILIC columns. The polymeric Shodex columns are LC/MS compatible and due to the very low bleeding of the stationary phase, the columns can also be used for particle sensitive detection such as evaporative light-scattering detection where bleeding (column particle shredding out of the column can cause high base line noise). This tutorial video also mentions how sugar analysis works and how to handle special problems such as reducing sugars and avoiding Schiff-Base building.

You can view the video by clicking on the play button in the image below... 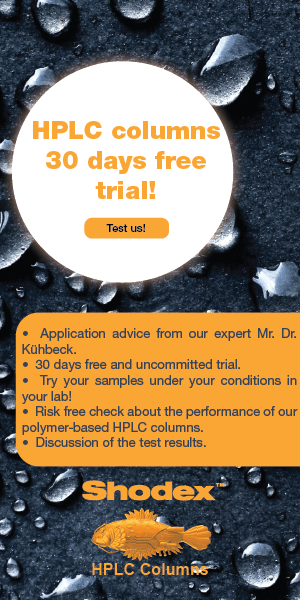