Food Analysis: What’s Changing and What Are My Sample Prep Options?

While food and beverage imports and exports continue to increase, regulating bodies are taking a greater interest in these activities that can affect public health. Since the early 2000s, worldwide food imports have increased dramatically, as have their expenses. By 2010, developed nations’ cost for food imports was in excess of $600 billion [1].

The global population increased by one billion people from October 1999 to October 2011 [2] — this is one clear reason for the increase in food import/export. Additionally, many consumers (particularly in developed nations) see fresh produce consumption, of their choice, as a necessity. Owing to the seasonality of many fresh food items, this expectation would be challenging without importation.

So, now we increase our risk of food-borne illnesses: while it’s not impossible that the farm down the road may have an outbreak of salmonella, if the food were only distributed locally, the problems would be contained. In our global community, however, the potential for wide-spread disease is a concern for governments and regulatory bodies. According to the FDA, about 15% of the food consumed in the US is imported. Hence, the recent FDA Food Safety Modernization Act (FSMA) rules. The Centers for Disease Control (CDC) estimates that one in six Americans will get food poisoning each year, leading to 130,000 hospitalizations and 3,000 deaths. 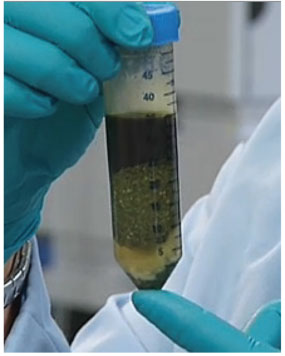 Figure 1: Shown here is the centrifuged tube after extraction salts were added (but prior to d-SPE clean-up of this tea leaf sample). The three layers shown are: Top: acetonitrile (ACN) organic layer containing the extracted compounds. This is what is removed for further d-SPE clean-up Middle: remaining sample solids Bottom: aqueous layer with the excess salts. In this example, there are also ceramic homogenizers, added to help with vortexing and shaking efficiency Photo courtesy of Agilent Technologies: On-line video of QuEChERS method.

FSMA’s goals are to prevent and reduce illnesses, as well as the costs associated with treating them [3]. This means that costs to food makers and growers (ergo consumers) will likely go up as they strive to comply with these safety standards. Two rules meant to begin implementation of FSMA, actually signed into law in 2011, were proposed by the FDA in early January, 2013. These are:

It’s this second rule that may have a significant near-future impact on analytical labs. Increases will be seen on throughput, as well as the analytical quality standards themselves. In the past few years, we’ve seen problems regarding both intentional and unintentional contamination, each leading to some action taken. FSMA attempts to create a consolidated safety programme.

One of the important steps of any food safety testing protocol is proper preparation of the samples in order to monitor for the presence of analytes, whether a screen of the unknown, or a specific target compound. Food samples are historically difficult to analyse; they contain carbohydrates such as fibre, strong pigments, lipids and other interferences. They can also be of plant or animal origin, each having their own unique characteristics that must be considered when selecting techniques for analysis. Lastly, the presence of water can be problematic, affecting extract efficiency and retention times. Outlined here are some of the more popular, well-established preparation techniques for getting food samples ready for chromatographic analysis. 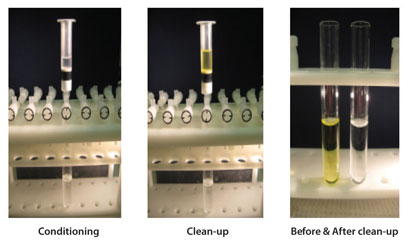 QuEChERS (Quick, Easy, Cheap, Effective, Rugged, Safe) is a broad-spectrum technique for extraction of naturally-occurring contaminants such as mycotoxins, as well as man-made contaminants such as pesticides or vet drugs [4]. The first of two stages of this technique includes analyte extraction (also known as partitioning), buffering and removal of water. The second stage concentrates on final clean-up with a dispersive-SPE (d-SPE) mixture. From there, introduce the extract to liquid or gas chromatographic instrumentation for analysis.

Many formulations are available that focus on specific types of foods, such as high pigment or fatty samples. Various solid-phase extraction sorbent combinations are used to achieve the result.
Examples:

Solid-Phase Extraction was already referenced above: the idea of attraction and repulsion is the basic idea behind this chemistry. What are you trying to strip out and what do you want to keep? Many labs chose to use pre-packed cartridges but some will blend a specific custom mixture of their own creation based off bulk SPE products. Trial-and-error method development, along with industry Application Note review, can give a lab an idea of good combinations based on their specific (and perhaps challenging) needs.
Solid-phase extraction is a focused method for targeting analytes based on their chemical properties. It’s useful to know these properties in order to make reasonable and effective choices. For example, are the compounds hydrophobic? Perhaps polar? Understanding these basic characteristics will make product selection for the most favourable result faster and easier.

Shown below are some steps for using SPE-mixed mode (Carbon and NH2) to clean up a pigmented sample for analysis using the Japanese Positives method for pesticides [5].
An alternate for SPE is Agilent SPEC, which is similar to filtration in its functionality and format. Available in plates and tubes, SPEC is glass fibre disc technology that incorporates SPE chemistry in a porous monolithic bed. By choosing SPE sorbents such as C18 or PSA, a lab can selectively choose the product that is most ideal for their particular food or beverage sample.

Solid Supported Liquid Extraction (SLE) is another method used in the sample preparation of food. SLE is diatomaceous Earth sorbent (fossilized diatoms), known for its high surface area particles; good for water adsorption and removal of salts. It is highly wettable and inorganic; analytes do not bind to the particles. Like QuEChERS, it is effective for screening unknown pesticides.

The SLE process is straightforward as the cartridges do not require conditioning, vacuum or centrifugation. There is less of an operator technique effect (very forgiving!). Unlike liquid/liquid extraction, there is no formation of an emulsion. Labs can even use the cartridges to store the sample for a time; they are stable. One disadvantage is the amount of solvent required.

SLE is spelled out in the EN 15637 Method (sometimes called Lutz-Alder method) for recovery of pesticide residues in fresh and processed foods of plant origin using LC–MS–MS. This method is very well-established/used.

Filtration is a good generic technique for a large number of sample preparation methods with a variety of sample matrices, either by itself or combined with other sample prep products. Filtration will clean up particulates, of which there can be many in food or beverage samples. For example, a particularly dirty food sample prepared via QuEChERS could see some additional improvement from added filtration clean-up. Or, filtration that precipitates proteins and strips out lipids might be all that is needed for testing of powdered milk, for instance. Filtration is membrane-based and is available in multi-well plates and single-sample cartridges.

SPME is solid-phase micro-extraction; polymer-coated fused silica fibres that can be immersed into the sample or used in a “head-space” analysis: gaseous vapours. Analytes stick to the fibre, then released when placed into the desorption chamber of an instrument. One advantage to this is that the fibres can be stored for a period of time prior to analysis. Think about the aromas from alcoholic beverages or the pungent smells (volatiles) and strong flavours from food ingredients such as vanilla: SPME is ideal for this type of testing. Samples for immersion of SPME fibres include fruit juices, honey or cheese. Various types of SPME fibres are available, chosen based on the type of sample and analyte. Little to no solvents are required — another benefit!

There are many choices for today’s food testing lab. There are also many challenges! The industry will see more stringent regulations and requirements this year but the food supply will be safer as a result. High risk groups such as children will benefit from the efforts of lab technicians and regulators alike. Consider the information presented here to make informed choices for your sample prep.