One question we regularly receive is regarding porous-layer bead packing materials. Are these for real or are they just hype? Let’s take a look at some of the characteristics of these column packings and see what lies between the frits of the column.

Normal HPLC column packings are fully porous particles. You can think of them as a rigid sponge, where >99% of the surface area is inside the particle. That means all the action in the separation process takes place inside the pores of the packing. In practice most particles are formed by piling up very tiny particles on top of each other to form a particle of particles, as I’ve shown in the cartoon at the left of Figure 1. 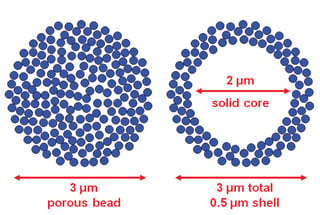 Diffusion is a limiting process in HPLC separations. As no flow takes place inside the packing material, molecules must diffuse in and out of the packing to get to the chemically active surface. Meanwhile other molecules are being actively transported downstream in the flowing mobile phase. So the longer a molecule stays inside the packing, the farther behind its friends it gets. This is a major cause of broad peaks. One approach to minimize this problem is to use smaller particles. Hence the diffusion distance to the center of a 2.5 µm diameter particle is half that of a 5 µm particle, and narrower bands result.

Although the technology has been around since the 1960s, recent technical advances have refined the preparation of particles that have a solid core.These have various names, such as fused-core, porous-shell, and porous-layer beads. They all have in common a solid core with the remainder of the particle comprising built-up layers of microparticles to form a shell-like covering. This is illustrated by the cartoon at the right of Figure 1.

So why should this approach be better than a fully porous particle? Let’s say that both particles in Figure 1 have a diameter of 3 µm and the solid bead in the right hand particle is 2 µm. This means that the shell on the outside is 0.5 µm thick. So in terms of diffusion distances, the permeable layer of the shell is equivalent to a 1 µm particle – very short diffusion distances, indeed. Yet the solid bead is only ≈30% of the total volume. This suggests that the shell has 70% of the volume of the 3 µm porous bead, or 70% of the loading capacity. This assumes that sample molecules have full access to the center of the 3 µm particle, which is doubtful, and practical results show little difference in loadability of the two particle types. Yet the shell particle is fully 3 µm in size, so it should have the same back pressure as its porous counterpart.

How do these play out in practice? The evidence I’ve seen is that the shell particles with ≈0.5 µm shell behave similarly to 2 µm porous particles – not quite as good as you’d wish, but significantly better than the 3 µm counterpart. And the back pressure is similar to a 3 µm particle. So far we have a win-win situation. But wait, there is one more “win.” The improved technology in making the particles results in such a narrow particle size distribution that they often can be packed into columns using 2 µm porosity frits – the same frits that are used with 5 µm traditional particles. This avoids the use of 0.5 µm frits usually required for 3 µm columns, one of the reasons they get blocked so easily. So it is win-win-win! If you haven’t tried one of these columns yet, I strongly suggest getting one – they are available from several suppliers now.