After I wrote an article on in-line Degasser (HPLC solutions #72), I immediately received some reader feedback on a specific failure, which was published in 'Failed Degasser' (HPLC solutions #73). Since that time I have been collecting occasional reports of degasser failures. This week I’d like to share a few of these.

System Shut-Down
One reader (SS) observed that her HPLC system shut down after about 10 min of running. The cause was not obvious, so she looked in the system log file and the only entry was that the system shut down because of some failure. After plenty of sleuthing, she discovered that the degasser she was using would shut off and shut down the rest of the system, if it could not reach the required vacuum in that period of time. The degasser was sent back to the factory, and after repair the system worked as it did normally.

System Not Shut-Down
Another reader (TJS) reported that her lab has about 50 HPLC systems with degassers, and only 2 of them have failed. One failure was much like the one I discussed in 'Inline Degasser' – her gradient method gave retention time variation of >5% RSD. After searching around, she discovered a red light was showing on the degasser unit, indicating a failure. For this instrument brand, the degasser failure did not shut down the system, as would happen normally with leak or over-pressure sensors. 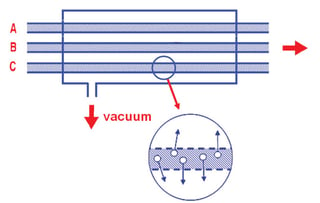 More Symptoms
Reader RV reported several cases of degasser failure in his experience. One showed the variation in retention times mentioned above. In another case, he notice that the degasser’s vacuum pump did not shut off periodically, as was normally the case. He poked around a bit and discovered that the vacuum tubing at one of the connections had broken nearly in half. Replacement of the tubing put the system back in operation.

Chemical Damage
A contact (JL) from one of the instrument manufacturers shared her observations of degasser failures resulting from chemical damage. In two cases, trifluoroacetic acid (TFA) was pronounced to be the cause. In one case, the vacuum pump corroded and in another the pressure transducer was damaged. I don’t believe this is a common problem with TFA, because hundreds (thousands?) of chromatographers use TFA as an integral part of the mobile phase for pH control and/or ion pairing. In a third case, the use of normal phase solvents resulted in dissolving an adhesive in the degasser unit. She noted that some manufacturers have degassers that are designed for normal-phase use.

Diagnostic Procedures
JL also suggested these four steps to help locate degasser problems:
The vent line from the vacuum pump should be open to the atmosphere. Check to be sure that something heavy isn’t sitting on the tubing, blocking it off, or that the end is not below the surface of the liquid in the waste bottle.

Listen for the vacuum pump when you turn on the unit. If you can’t hear it, it probably isn’t operating. Is it plugged in? Is it turned on? Is it broken?

If there is a pressure (or vacuum) readout on the system that isn’t reading normally, you can test this by pinching shut the tubing going into the vacuum pump. Do this with a pinch clamp or by pulling the tubing off and blocking it. If the vacuum returns to normal, there is a leak in the rest of the system; if it still does not read correctly, the vacuum pump is suspect. If there is not a pressure (vacuum) readout, sometimes you can do the same test and hear the pump change sound as the vacuum is pulled (normal), indicating a leak elsewhere in the system.

Problems with the degasser tubing or membranes inside the chamber usually can be discovered by looking for leaks.

Thanks to these readers for sharing their experiences. If you have a good story about an HPLC failure (and repair) that might help other readers avoid the same problem (or shorten the troubleshooting cycle), please let me know.