A reader wrote me recently asking what would happen if he injected his sample, which came dissolved in hexane, into a reversed-phase mobile phase of methanol-buffer. The first answer is that this is not a good habit, but is it possible? We’ll see.

When a large sample is injected in a solvent stronger than the mobile phase, peak distortion can occur. An example of this is shown in Figure 1, where a mobile phase of 18% acetonitrile (ACN) is used. On the right, in Figure 1b, a 30 µL injection of sample is made using mobile phase as the injection solvent and sharp peaks are observed. If, on the other hand, the sample is dissolved in 100% ACN, as is the case on the left, in Figure 1a, we observe two things. We observe that the peaks are distorted, especially the first one, and a closer look shows that the retention times are shorter than normal. If you think about what is happening in the column, this makes sense. The strong injection solvent enters the column and must get mixed and diluted with the mobile phase. If the volume is large, as in the Figure 1a, the plug of solvent travels down the column at the flow rate, becoming diluted as it travels. Meanwhile, sample molecules on the outside of the injection plug “see” the true mobile phase and act normally, whereas the molecules in the middle of the plug “see” the injection solvent as the mobile phase and travel faster than normal. The result is a sample that gets smeared along the column until the injection solvent gets diluted out. And once smeared onto the column, the sample doesn’t recover, so distorted peaks appear. Because some of the molecules are flushed quickly down the column during the dilution process, the average retention time is shorter. 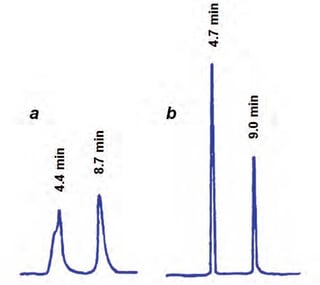 So where does this leave us with hexane as an injection solvent? Not only is the injection solvent much stronger than the mobile phase, but it is not miscible either. This sounds like a disaster waiting to happen – and it may be. But not so fast! If the injection volume is small enough, it may be possible to disperse the injection solvent in the mobile phase sufficiently that acceptable peak shape results. This will be a matter of trial and error. I would start by making a solution of my sample in hexane at a high enough concentration that I get a good response, even at very small volumes. First, inject the sample dissolved in mobile phase as a reference. Then inject 1 µL, 2 µL, 5 µL, 10 µL, and 20 µL of the hexane solution and see what happens. I expect that 1 µL will be acceptable, but at some volume, the peaks will start coming out too early and will be distorted, as in Figure 1a. No, it’s not ideal, but it may work. I remember doing exactly this with a sample we received that was dissolved in toluene. We already had a method for the same compound as a reversed-phase method. If I recall correctly, we were able to run with 5-µL injections and obtain acceptable results.

My favorite chemistry quote is from Izaak Kolthoff, considered by many to be the father of analytical chemistry: “Theory guides, experiment decides.” Here is a good example of that – no, hexane is not compatible with a methanol-water mobile phase, but under the right conditions, you just might get away with it.