Q: Is it OK to back-flush a column? I’m using a C18 column for a routine analysis and the pressure has risen. I think that if I reverse the column I can unplug it. Is this OK or will I damage the column.

JWD : The short answer is that most silica-based HPLC columns can be reversed without damage. There are several things to consider, and you should always check with the column care and use instructions to be sure that column reversal is OK for your column.

First of all, you are quite right that reversal of the column may be effective in cleaning off whatever is plugging up the column. The assumption is that particulate matter from your sample, mobile phase, or worn pump or injector seals has blocked the inlet frit of the column. This is normal over time. If this is the case, column reversal will displace this material perhaps a third of the time, causing the pressure to go back to normal. 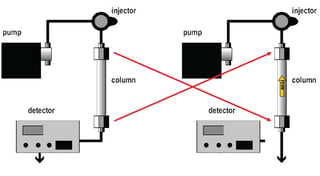 If you want to reverse-flush, just reconfigure the column as illustrated in Figure 1. Simply reverse the column and flush to waste. Disconnect the detector, because you don’t want to flush any particles into the detector cell.

A second consideration is whether to return the column to its normal flow direction or to leave it reversed. Many, if not most, silica-based HPLC columns can be operated in either direction – the flow direction arrow is merely advisory. The only time a problem could occur is if the frits are not the same porosity on both ends of the column. Columns packed with 5-µm particles use 2-µm porosity frits on both ends, and the same holds for columns packed with 3.5-µm particles. However, the 2-µm frits are not sufficient to do a good job of holding 3-µm particles in the column. For this reason, 0.5-µm frits are used with 3-µm columns. But the 0.5-µm frits are more easily blocked than 2-µm ones, so some manufacturers use 0.5 µm frits on the outlet and 2-µm frits on the inlet of 3-µm columns. In this case, a brief reversal to back-flush the column is probably OK, but I wouldn’t leave the column reversed for an extended period. Sub-3-µm particles use 0.5- or 0.2-µm frits in various combinations. Just to be safe, check the column instructions to see if they can be operated routinely in either direction.

OK, let’s assume that the column can be operated with the flow in either direction. Should you leave the column reversed or put it back in the normal flow mode? I have seen enough cases where the pressure dropped to normal when the column was reversed, but it rose again when the original direction was restored. It seems to me that a likely cause for this is the collection of fine particles on the upstream side of the original outlet frit. When the flow is reversed, the particles are displaced and the pressure drops to normal, but when the normal flow direction is resumed, the particles once again block the frit. For this reason, I like to leave the column reversed after I flush it.