The mobile phase in HPLC strongly influences chromatographic separations. Its preparation can prove to be a source of trouble for a method, if not done correctly and consistently. Part two of this series on mobile phase preparation focuses on buffers that play a crucial role in a majority of LC separations. Read this article from Issue 11 of the Analytix Reporter, produced by Merck, to find out more. 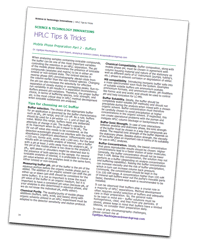 When analysing samples containing ionizable compounds, the buffer can be one of the most important variables controlling the retention in an HPLC separation. The pH of the mobile phase determines the presence of ionizable compounds (analytes and matrix) to be in either an ionized or non-ionized state. The ionized species in reverse phase (RP) chromatography always elute from the column earlier than the non-ionized species. Changing the pH can also increase the selectivity for effective separation of closely eluting or overlapping peaks. Run-torun variability in pH results in a separation inconsistency. Buffers prevent pH variations. Therefore, the proper buffer choice, in terms of buffering species, ionic strength, and pH, is the most critical step in HPLC method development when ionizable substances are analysed.

Conclusion
It can be observed that buffers play a crucial role in a majority of HPLC separations. Method development often requires careful selection of buffers and adequate care in their preparation. So, the general rules to be kept in mind are― buffer solutions must be homogeneous, clear, and free from any particles. If stored, please keep in mind that buffers have a limited lifetime, so consider their preparation daily.