Acid in A and B

I had a follow-up enquiry about one of the recent articles. In 'Why Acid?', I discussed some of the reasons why acids such as formic or trifluoroacetic (TFA) are added to mobile phases for LC-MS work. The reader noted that in Figure 1 of that article, I suggested putting the acid in both the aqueous A-solvent and the organic B-solvent. She said that she only put it in A so that she could have pure ACN in B and then could use it with other mobile-phase combinations as well. Is there anything the matter with this?

The answer really depends on the role the acid is playing in the separation. If the acid is only there to keep the pH of the mobile phase low, it is unlikely to make much difference if it is only in A or in both A and B, as long as there is sufficient acid in the final mixture. For example, 0.1% formic acid in A becomes 0.01% formic acid when used in a 10:90 ratio with ACN – at some point there won’t be enough formic acid present to do its job.

There are two cases that come to mind where adding the acid to B could be important. The first is in a case where the ionic strength of the mobile phase is important. This might occur when ionic or electrostatic interactions play an important role in the separation, such as with ion exchange. With ion exchange, the ionic strength of the mobile phase will affect the separation. Another example where this might be important is in HILIC (hydrophilic interaction chromatography), where retention is a combination of partition and electrostatic processes. In either example, as long as you are consistent about the way the mobile phase is prepared, you should be OK. 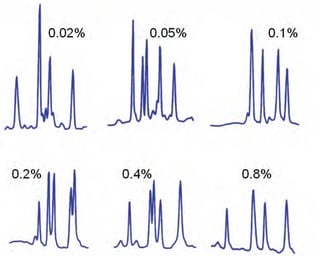 So in answer to the question, yes, you usually can get by with putting the additive in just the A-solvent, but it is better if it goes in both A and B. It really is a matter of the right way vs the easy way. Whatever you choose, be sure to state very clearly in the method document how the mobile phase components are to be prepared. Don’t leave it up to the operator to choose, because then it will probably be just a matter of time before problems arise.