The Function of GC Columns

All you need to know about GC columns, key processes involved and high-level description of differences between them.

In this article we present a general overview of the purpose of GC columns, key processes involved and high-level description of differences between them.

The column is the heart of the gas chromatograph. It is through interactions between solutes (individual compounds in the sample, also called analytes) and the stationary phase within the column that separation can occur. The driving force that moves solutes forward, the mobile phase , is a gas, also called the carrier gas . Unlike in liquid and supercritical fluid chromatographies, the mobile phase in GC plays no active role in the separation process other than to move solutes toward the column outlet.

Stationary phases that are used in GC are of two general types; solid or liquid . In gas-solid chromatography (GSC), a solid material with high porosity provides a high surface area (several hundred m2/g ) whereupon separation can take place through surface interactions. The dominant physical process involved in GSC is called adsorption . Adsorptive interactions are very strong (high energy) and therefore gas-solid chromatography is used for the separation of low molecular weight, volatile materials that are gases at room temperature. Some solid materials that work well as stationary phases in GSC are listed in Table 1. 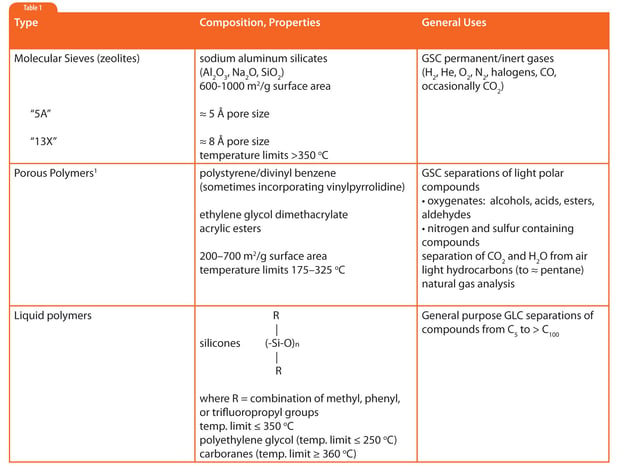 Molecular Sieves
The most retentive solid stationary phases are called molecular sieves (also known as zeolites ). They are used to separate the smallest, most volatile compounds: inert or permanent gases. The strength of interactions with molecular sieves is so high in fact, that most compounds other than permanent gases are irreversibly retained by them. That is why many carrier gas traps are used to clean carrier gases prior to reaching the GC contain molecular sieves - to remove traces of water and hydrocarbons. In gas chromatography, the term “molecular sieve” is a bit of a misnomer. Molecules elute in order of molecular size — the larger the molecule; the more strongly it is retained. This is the opposite of size exclusion liquid chromatography wherein large molecules elute first because of exclusion from pores in the packing material.

In addition to being packed into glass or stainless steel columns, molecular sieve particles can be immobilized on the inside surface of open tubular capillary columns. These are called Porous Layer Open Tubular (PLOT) columns and can generate higher separation power than packed columns because longer column lengths are possible with open tubular capillary columns than with packed columns.