SPME-GC/MS analysis of terpenes in hops and cannabis

Are you looking for a simple headspace SPME-GC/MS method for the analysis of the terpene/terpenoid profiles of both hops and cannabis? Do you want the method to detect the characteristic terpenes and terpenoids, and to distinguish between different hops varieties? 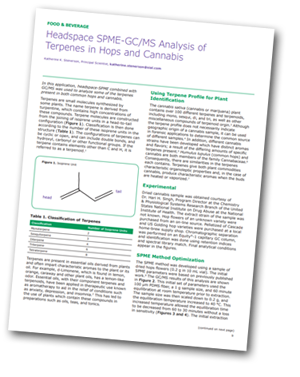 Terpenes are small molecules synthesized by some plants. The name terpene is derived from turpentine, which contains high concentrations of these compounds. Terpene molecules are constructed from the joining of isoprene units in a head-to-tail configuration, and classification is then done according to the number of these isoprene units in the structure. The configurations of terpenes can be cyclic or open, and can include double bonds, and hydroxyl, carbonyl or other functional groups. If the terpene contains elements other than C and H, it is referred to as a terpenoid.

Terpenes are present in essential oils derived from plants and often impart characteristic aromas to the plant or its oil. For example, d-Limonene, which is found in lemon, orange, caraway and other plant oils, has a lemon-like odor. Essential oils, with their component terpenes and terpenoids, have been applied in therapeutic use known as aromatherapy to aid in the relief of conditions such as anxiety, depression, and insomnia. This has led to the use of plants which contain these compounds in preparations such as oils, teas, and tonics.

The cannabis sativa (cannabis or marijuana) plant contains over 100 different terpenes and terpenoids,
including mono, sesqui, di, and tri, as well as other miscellaneous compounds of terpenoid orgin. Although
the terpene profile does not necessarily indicate geographic origin of a cannabis sample, it can be used in forensic applications to determine the common source of different samples. In addition, different cannabis strains have been developed which have distinct aromas and flavors; a result of the differing amounts of specific terpenes present. Humulus lupulus (common hops) and cannabis are both members of the family Cannabaceae. Consequently, there are similarities in the terpenes each contains. Terpenes give both plant commodities characteristic organoleptic properties and, in the case of cannabis, produce characteristic aromas when the buds are heated or vaporized.

In this application, headspace-SPME combined with GC/MS was used to analyze some of the terpenes present in both common hops and cannabis. To read the full article click on the button below...