Reduce your current GC-MS analysis time and get results faster

by Separation Science in collaboration with Restek

Would you like to significantly reduce your current GC-MS analysis time while maintaining the same chromatographic separation? The combination of using a GC Accelerator oven insert kit and adapting an existing method to a scaled-down, more efficient column using Restek's EZGC method translator is a surprisingly simple means of speeding up your analyses to get similar results faster. 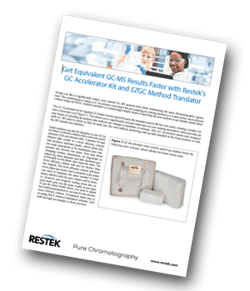 The example given in this application note relates to performing PCB analyses on an Agilent GC-MS using a scaled-down column with the same phase ratio and total number of theoretical plates. Step-by-step instructions are given to obtain the translated method conditions that provide the same chromatographic separation in less time on the new column.

The GC Accelerator kit for Agilent GCs helps increase speed because the insulated inserts fill the oven cavity, creating a smaller volume to heat and cool. This allows you to significantly increase ramp rates on your existing instrument, which provides an easy means of speeding up analysis time without any changes to hardware or software. Also, GC Accelerator inserts were designed with GC-MS users in mind, so they fit easily into the oven without interfering with an inlet installed in the front position or with the MS transfer line interface.

Faster analyses can also be obtained on any GC by moving to a shorter column with a narrower inner diameter (ID) and thinner film. A smaller ID and thinner film results in a more efficient column that produces narrower peaks, which allow relative peak separations to be maintained and compressed into shorter run times. When changing column dimensions, it’s important to adjust the inner diameter and film thickness proportionally so the phase ratio stays the same. The more efficient column will also be shorter than the original. The more efficient column will have more plates per meter, but to properly scale down you need to maintain the same number of total plates, which is why the new column will be shorter. However, just properly scaling down the column won’t give you the same results in less time. To get the same results faster, you need to adjust key method parameters to account for the shorter, more efficient column. This is easily achievable using EZGC method translation software.

The application note walks through an example of performing PCB analyses on an Agilent GC-MS. Simple steps for obtaining the translated method conditions that provide the same chromatographic separation in less time on the new column are given, which in the example, provide a saving of almost 8 minutes, which is almost 30%, in analysis time.

Conclusion
In conclusion, equivalent chromatographic results can be obtained in much faster analysis times for many applications by moving to a scaled-down, more efficient column with the same phase ratio. EZGC method translation software from Restek makes it exceptionally easy to do this on any GC system, and the translated method can be even further optimized if desired. When moving to a translated method, make sure that the new oven program does not exceed the capabilities of your oven. Agilent GC-MS users can use GC Accelerator oven inserts to achieve more aggressive oven programs. These inserts reduce oven volume, which allows the oven to heat and cool faster, ultimately resulting in faster analyses.