Here, we tackle another potential problem of hot split injection: sample decomposition. Decomposition changes the nature of components in the original sample, affecting the “recovery” of target compounds. This in turn introduces errors in analytical results. We will look at common forms of decomposition and the clues your chromatograms might be presenting you that decomposition is happening.

Some molecules are stable. For them, decomposition is not an issue. Such is the case for most analyses involving petroleum samples and most common industrial chemicals (e.g., solvents).

Labile (fragile) molecules can change chemically (decompose, degrade, or react) as they pass through hot inlets and/or active sample paths. The extent and the manifestation of the changes are a function of the molecule, and its environment during analysis.

The more “polar” a molecule, the more likely it is to be susceptible to degradation. Polar functional groups such as those containing nitrogen, sulfur, phosphorus and oxygen commonly have weak bonds when incorporated into organic molecules. The weaker the molecular bond, the more prone the molecule is to degradation.

There are several factors that influence the degree of decomposition:

Figure 1: Endrin can decompose to endrin aldehyde and endrin ketone, both of which elute later.

Activity in the sample path can come from many sources. Metal surfaces can be extremely active because they provide many mechanisms that catalyse (encourage, initiate, accelerate) decomposition. Glass liners are used in inlets to shield sample vapours from the surrounding metal inlet weldment, yet some of the sample vapours still make it to the metal prior to entering the column. Even the glass surfaces themselves are not inert. Glasses commonly used for inlet liners contain oxides of boron, sodium, aluminium, magnesium, etc. Even the surface of highly purified quartz (pure silicon dioxide) is acidic and that can accelerate

FIgure 2: DDT can decompose to DDE and DDD which elute slightly earlier.

That is why the most inlet liners are “deactivated” to hide active sites on the surface. Activity is also directly related to the area of the exposed active surface. That is why glass wool can be such a problem for labile compounds, especially if it has many exposed broken ends.

There are many forms of decomposition.

Sometimes it is impossible to have a completely inert system; some decomposition is inevitable. When this is the case, one can set a limit for the amount of degradation that is deemed “acceptable” in order to still report analytical results. Such is the case with many US EPA methods involving polychlorinated pesticides. Two such banned pesticides that are prone to degradation and rearrangement reactions are endrin and DDT. Endrin degrades to endrin aldehyde and endrin ketone which, because of molecular rearrangement, are more highly retained (elute at higher temperatures) than the parent compound, endrin (Figure 1). DDT decomposes to DDD and DDE which are less retained than DDT (Figure 2).

As some degradation is inevitable with these compounds when introducing them through hot inlets, the standard methods allow a total of 15-20% degradation, depending on the method. If degradation exceeds this for degradation check standards, then data cannot be reported and system maintenance must be performed and the samples re-run. Maintenance in this case usually involves replacing the liner and trimming the head of the column, because both can become more active as more samples are run, especially if they are of soil extracts.

When compounds degrade in the inlet and the decomposition products are amenable to GC (they are “GC-able”), then the degradation peaks will form sharp peaks. This is because the degradation happens in a matter of seconds as the vapours pass through the inlet. Let’s look at an example: thermal degradation of dicumylperoxide. Dicumylperoxide can degrade in a hot GC inlet into, among other things, acetophenone and dimethylbenzenemethanol. Essentially, the parent molecule fragments in half (Figure 3), yielding products that elute much earlier than the parent. 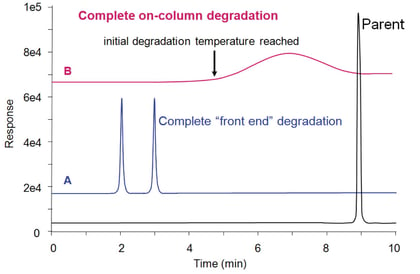 Figure 4: (A) “Front end” degradation peaks (2 + 3 min) are sharp and baseline is clean afterward, indicating that the parent compound decomposed completely prior to reaching the column (in the vial prior to injection, or more likely in the hot inlet during injection). (B) Degradation inside the column starts to happen when some minimum temperature is reached and continues until the parent compound is gone. The broad peak (many times wider than typical peak width) with lack of parent peak indicates total decomposition within the column.

In Figure 4(A), the early-eluting peaks represent the degradation products. The shape of the peaks is sharp. In this example, the dicumylperoxide parent peak is absent, indicating that it had completely degraded in the inlet. This is termed “front end” decomposition because it happens prior to entry of the sample into the column. In this example, it would be impossible to tell if the sample had degraded in the sample vial prior to injection or during the injection process itself. Only by performing further tests would one be able to differentiate inlet decomposition from in-vial decomposition.