In 2016, the International Fragrance Association (IFRA) published a new method [1] for the testing of 57 potentially allergenic fragrance compounds in response to an opinion by the European Scientific Committee on Consumer Safety (SCCS), which also proposed to correspondingly amend EC regulation No. 1223/2009.

This new analytical method has been developed by the IFRA Analytical Working Group to identify and to quantify the 57 fragrance substances and their relevant isomers at a concentration higher than 0.002% (20 mg/kg) in ready to inject fragrance materials and oils using Gas Chromatography with FID (GC-FID) or with Mass Spectrometry (GC-MS) detection. This new method will allow the screening of complex fragrance mixtures for the presence of these chemically defined allergens.

In issue #3 of the 2018 Analytix Reporter from Merck KGaA, an article discusses the introduction of new certified reference materials (CRMs) and their analysis by GC using an ionic liquid column as an alternative with unique selectivity and stability as compared to traditional wax/PEG phases. 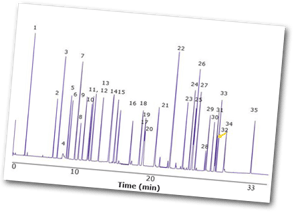 The article goes on to outline that with the two new ready-to-use CRMs, fragrance manufacturers and testing labs are being provided with reliable, high quality standard calibration solutions suitable for the new IFRA method. This is a major advancement in improving the safety of personal care products and allowing manufacturers to retain their customer's trust. For the GC analysis, the SLB®-IL60i ionic liquid phase column is an alternative to the traditional capillary columns used for fragrance analysis, providing unique separation patterns and often fewer co-elutions. It shows a significantly reduced column bleed compared to traditional polar columns like PEG/wax phases.