It also generates much lower solvent wastes as compared to liquid chromatography (LC). Examples of using UPC2 for fat-soluble vitamins (FSV) are presented here to illustrate the advantages of UPC2 technology over current techniques in SFV analysis.

Supercritical fluid was first used in chromatography in 1962 (1). Carbon dioxide is the most commonly used mobile phase in supercritical fluid chromatography (SFC) due to its many beneficial attributes (low viscosity, high diffusivity, chemically stable, low cost, and readily available) (2). Its low viscosity and high diffusivity properties render high column efficiencies and fast analyses, without high back-pressures. The non-polar nature of neat carbon dioxide can be modified by the addition of more polar solvents or modifiers for more polar compounds. The solvating power of the mobile phase can also be fine tuned by changing its density through back-pressure control. Since the 1980s, SFC has been applied to many areas, including pharmaceutical, petrochemical, food, and environmental analysis (2,3). However, the lack of high quality, robust, and easy-to-use instrumentation has prevented it from broad adoption. UltraPerformance Convergence Chromatography (UPC2) uses compressed carbon dioxide as the primary mobile phase. By taking advantage of sub-two micron particle chromatography columns and advanced chromatography system design, it achieves fast and reliable separation with high efficiencies and unique selectivity. It, therefore, has shown great potential for a wide range of applications, including FSV analysis (4). 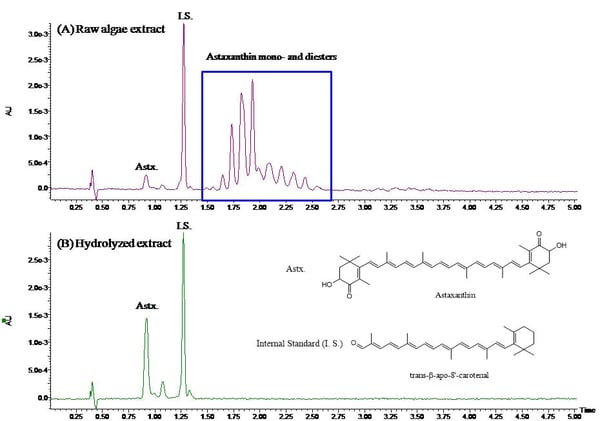 Fat-soluble vitamins analysis is one of the common food and nutrition analysis areas. FSV include vitamins A, D, E, K, and provitamin A carotenoids. They can be analysed by a number of techniques, including NP and reversed-phase (RP) LC (5). NPLC provides good separation of the cis/trans form of vitamins, and can tolerate hydrophobic materials from the sample. Direct injection of sample extract with high lipid content is possible in NPLC, which allows less clean-up in sample preparation. However, NPLC suffers long runtime (about 30 minutes), slow equilibration and poor reproducibility. RPLC is generally reliable and suitable for gradient elution, but has a potential sample carryover issue for non-polar compounds. It also requires more stringent sample clean-up to remove fat and other hydrophobic materials. Figure 1 shows an example of a UPC2 separation of nine representative FSV and carotenoids standards (6), whose structures are shown in Figure 2. These compounds are separated in one injection within four minutes; whereas using LC, it usually takes two or more assays to separate these compounds. It is worth pointing out that the critical pair of vitamin K1 and vitamin K2 (menatetranone, MK-4) is extremely difficult to separate simultaneously along with the other seven compounds by LC. Their structures are very similar; the only difference between them is the number of double bonds on the side chain. An attempt to separate vitamin K1 and vitamin K2 is shown in Figure 3, where a commercially available C30 column failed to separate this critical pair. With UPC2, the excellent selectivity of the HSS C18 column makes it feasible to simultaneously separate nine FSV and carotenoids in one four-minute run, which significantly increases the analysis throughput. The repeatability in retention time and peak area is summarized in Table 1. The results are comparable to a typical LC repeatability performance. The UPC2 analysis of nine FSV standards (Figure 1) provides a starting point for FSV analysis in simple sample matrices, such as dietary supplements or vitamin premixes. It can potentially dramatically increase the throughput in FSV analysis. 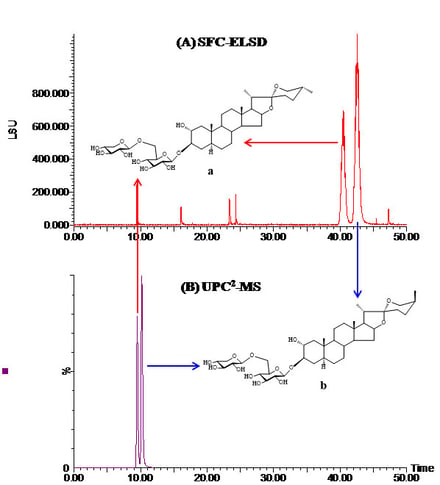 For complex food products, a separate example of simultaneous determination of vitamins A and E in infant formula (IF) by UPC2 is shown in Figure 4 (7). There are many LC based analysis methods available for the determination of vitamins A and E in IF (8–10). Among these methods, some use saponification and clean-up in sample preparation, while others use relatively simple liquid-liquid extraction. The LC separation usually takes 30 minutes long. One method uses two chromatography systems to separate and quantify vitamin A and vitamin E, respectively (8). In the example shown in Figure 4, vitamins A and E, including their cis and all trans forms, were separated on a single column in less than two minutes (Figure 4A), before any IF matrix materials started to elute out of column (Figure 4B). The total cycle time was eight minutes, including five minutes runtime and three minutes re-eqilibration time. This is a significant reduction in separation time as compared to the typical 30 minute LC separation. In addition, UPC2 allowed direct injection of the sample extract (in iso-octane), and did not require saponification. Not only did this greatly reduce the time and labour in sample preparation and lead to increased analysis throughput, but also avoided potential loss of analytes during sample preparation, and eliminated potential sources of error. The repeatability and recovery of the analysis of vitamins A and E in a spiked IF sample were acceptable for routine analysis (Table 2). It is also important to note that in the above mentioned two examples (Figure 1 and 4), UPC2 methods not only reduced the use of organic solvent, but also eliminated the use of halogenated solvents that were sometimes used in routine FSV analysis by NPLC.

Figure 3: (A) UPLC-MS (B) UPC2-MS and (C) Prep SFC-MS chromatograms of the natural product sample after initial purification. In each panel, the top two traces are extracted ion chromatograms (XICs) of MS and the bottom trace is total ion chromatograms (TIC) of the diode array detector (DAD). The shaded area indicates collected target compound.

Overall, it is evident that UPC2 has many advantages over LC methods for FSV analysis. Its unique selectivity makes it possible to combine multiple separate LC analyses into one single multi-analyte analysis. UPC2 allows for simplified sample preparation, rapid separation, and generates minimal solvent wastes. All these result in significant improvement in analysis throughput and savings in operational cost. UPC2 holds great promise to become the primary technique for analysis of FSV and other non-polar compounds in foodstuff.