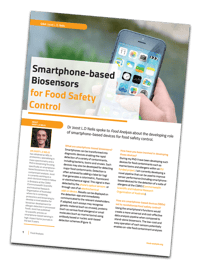 Smartphones can be transformed into diagnostic devices enabling the rapid detection of a variety of contaminants, including bacteria, toxins and viruses. Such devices may also be developed for detecting major food contaminants. Detection is often achieved by adding a label (or tag) that generates a colorimetric, fluorescent or electrochemical signal. This signal is then detected by the phone’s optical sensors or through use of an electrochemical
add-on device. Results can be displayed on the detection-app and immediately communicated to the relevant stakeholders. If adapted, such assays may recognise genetic material (such as viruses), proteins (such as various food allergens) or small molecules (such as marine toxins) using antibody based or nucleic acid-based detection schemes.

Dr Nelis has been developing such devices for food contaminants such as marine toxins and allergens within an EU funded project.

To view the full article complete the form below: