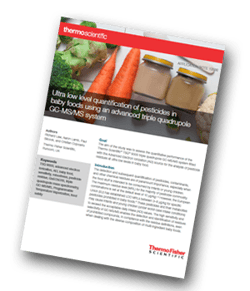 Introduction
The detection and subsequent quantification of pesticides, contaminants, and other chemical residues are of paramount importance, especially when the food stuff is intended to be consumed by infants or young children. The maximum residue level (MRL) for the majority of pesticide-commodity combinations is set at the default level of 10 μg/kg. However, the European Union (EU) has established LOD MRLs between 3–8 μg/kg for specific pesticides prohibited in baby foods. These pesticides and their metabolites may cause infants and young children (under worst-case intake conditions) to exceed the acceptable daily intake (ADI) values. The high sensitivity and selectivity of GC-MS/MS enables the detection and identification of residues of prohibited compounds, in compliance with the residue definitions, even when dealing with the diverse composition of multi-ingredient baby foods.

In this study, the quantitative performance of the Thermo Scientific™ TSQ™ 9000 triple quadrupole GC-MS/MS system was assessed for the analysis of more than 200 pesticides in baby food at ultra low concentrations (as low as 0.025 μg/kg). A complete evaluation of method performance included sample preparation, overall method suitability measured from pesticides recoveries, selectivity, sensitivity, linearity, and long-term robustness.

Results and Discussion
Compliance with EU SANTE criteria
The method performance was tested in accordance to the SANTE/11813/2017 guidance document, which requires that the following criteria are satisfied for identification of pesticide residues:

Wherever SANTE compliance is referenced in this study, all three criteria have been met fully.


Conclusions
In this work it has been demonstrated that by using QuEChERS with Thermo Scientific HyperSep dSPE products and a direct injection of acetonitrile extracts, the TSQ 9000 AEI system delivers outstanding quantitative performance for low-level pesticide residue analysis in baby food.