This application note from PerkinElmer details an effective, reliable and robust LC-MS/MS method, using time-managed MRM (Multiple Reaction Monitoring) transitions, for the monitoring of mycotoxins
in multi-grain and corn cereals at low µg/kg levels, without the need for derivatization. 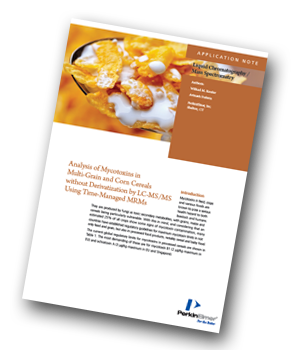 Introduction
Mycotoxins in feed, crops and various foods are known to pose a serious health hazard to both livestock and humans. They are produced by fungi as toxic secondary metabolites, with grains, maize and cereals being particularly vulnerable. With this in mind, and considering that an estimated 25% of all crops show some signs of mycotoxin contamination, many countries have established regulatory guidelines for maximum mycotoxin limits in not only feed and grain, but also in processed food products, notably cereal and baby food.

The analyzed mycotoxins in this study included aflatoxins B1, B2, G1, G2, ochratoxin A, HT-2 and T-2 toxins, ergocristine and fumonisins F-B1 and F-B2.

Experimental
Hardware/Software
For the chromatographic separations, a PerkinElmer UHPLC System was used with a PerkinElmer QSight® 210 MS/MS detector. All instrument control, analysis and data processing.