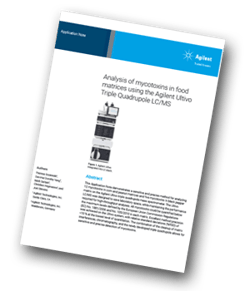 Abstract
The Ultivo LC/MS was designed to save laboratory space, while maintaining the performance required for high-throughput analyses. All mycotoxins could be quantified below the maximum levels defined by the European Union Commission Regulations (EC) No. 1881/2006 and No. 105/2010 in each matrix. Excellent method precision was achieved on the Ultivo system, with relative standard deviations (%RSD) of <10 % at the lowest level of quantitation. The combination of the cleanup of matrix interferences, chromatography, and the newly developed triple quadrupole allows for sensitive and precise detection of mycotoxins.

Introduction
Mycotoxins are produced by fungi that can grow on various crops. At certain levels and combinations, mycotoxins can be harmful to humans and livestock through consumption of contaminated crops; therefore, mycotoxin levels are regulated in foods to minimize the risk of ingestion. To ensure that harmful levels of mycotoxins do not enter the food supply, regulatory agencies have established maximum levels (MLs), ranging from 0.1 ppb in some baby foods to ppm levels in some animal feeds. It is important to accurately quantify the mycotoxin contents below the ML across various food matrices, as each matrix composition poses different challenges.

Experimental
Sample preparation
Corn flour, peanuts, and ground black pepper were obtained from local grocery stores. Five grams of corn flour, 5 g of ground peanuts (ground in a blender, and frozen until analysis), or 2 g of ground black pepper were weighed into 50‑mL polypropylene tubes and extracted using 10 mL of acetonitrile and 10 mL of ultrapure H2O with 0.2 % FA and shaken using a rotary shaker (Heidolph Hei-MIX Multi reax, 545-10000‑00) for 30 minutes.

Results and Discussion
This study used the European Union regulations No. 1881/2006 and No. 105/2010 as a benchmark. This procedure was done because the EU generally had the lowest maximum level (ML) for mycotoxins compared to other regional regulatory agencies. The non-regulated compounds were either not included in the matrix, or estimated based on current levels of concern.