Analysis of pesticides in cannabis using QuEChERS extraction and cleanup 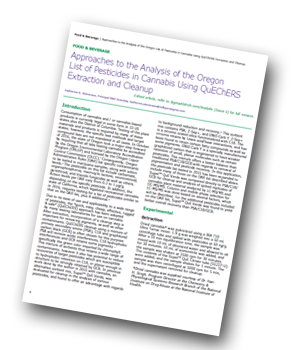 Consumption of cannabis and / or cannabis-based products is currently legal in some form in 33 US states plus the District of Columbia. Testing of the plant materials and products is required by many of these states; however the specific test methods and target compound lists are not mandated in all cases. In October of 2016, the state of Oregon took a major step forward by requiring that all labs testing cannabis be accredited by the Oregon Environmental Laboratory Accreditation Program (ORLEP) and licensed by the Oregon Liquor Control Commission (OLCC). Consequently, Oregon Administrative Rules (OAR) list specific contaminants to be tested in marijuana samples, along with action levels. The pesticides on this list include carbamate, organophosphorus, macrocylic lactone, neonicotinoid, pyrethroid, and triazole fungicides as well as others. Action levels per OAR vary from 0.2 to 1 ug/g, depending on the specific pesticide. In addition, the state of California, which legalized recreational cannabis in 2016, requires testing for a list of pesticides similar to that on the OAR list, plus 8 additional.

Due to its ease of use and applicability to a wide range of pesticides, the “quick, easy, cheap, effective, rugged & safe” (QuEChERS) approach has been adopted by many testing laboratories for use on cannabis. After extraction, incorporation of a cleanup step is important for removing pigments, as well as other contaminants. A QuEChERS cleanup using a mixture of primary secondary amine (PSA), C18 and graphitized carbon black (GCB) is often chosen for this purpose. PSA will remove acidic interferences, C18 hydrophobic interferences and GCB retains some pigments – specifically the green color imparted by chlorophyll. This mixture of sorbents thus retains a wide range of contaminants; however it also has potential to reduce recoveries of target pesticides which are susceptible to hydrophobic retention on C18, or planar enough in structure to be strongly retained by GCB. In previous work done by the author in 2015 with cannabis, an alternative sorbent mix, Supel™ Que Verde, was evaluated for cleanup in the analysis of various pesticides, and found to offer an advantage with regards to background reduction and recovery. This sorbent mix contains PSA, Z-Sep+, and ENVI-Carb™ Y. Z-Sep+ is a zirconia coated silica functionalized with C18. The zirconia retains by Lewis acid/base interactions, and has been found to retain certain fatty compounds as well as some pigments. ENVI-Carb™ Y is a specially manufactured graphitized carbon that is engineered to have weaker retention of small, planar molecules such as certain pesticides. This mixture offers a better balance than traditional PSA/C18/GCB with regards to removal of pigmentation and pesticide recovery. In this application, the pesticide list tested in 2015 has been expanded to include many of those on the OAR list described above. Supel Que Verde was compared directly to PSA/C18/GCB for cleanup and analysis of spiked replicates of cannabis plant material analyzed by LC/MS/MS and GC/MS/MS. Column and mobile phase selection for LC/MS/MS was done based on several factors, which will be described. For the additional pesticides included on the OAR list, Supel Que Verde was found to yield better overall recovery than PSA/C18/GCB.

In the analysis of the a majority of the pesticide list required by the state Oregon for cannabis, several recommendations can be made: