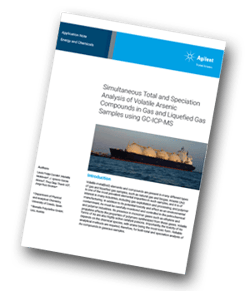 Introduction
Volatile metal(loid) elements and compounds are present in many different types of gas and liquefied gas samples, such as natural gas and biogas. Arsenic (As) is one of the most prevalent elemental impurities in such samples, and it is of interest in many industries, including gas exploitation and processing, and polymer manufacturing. In addition to its potential toxicity and effect as an environmental contaminant, As must be carefully monitored and controlled in the petrochemical and polymer industries.

In this study, a novel GC-ICP-MS method was used that combines As speciation analysis and total elemental As determination in one measurement. The potential of the method for the simultaneous determination of total elemental concentrations and individual species of other elements, such as Hg, in gases is also shown.

Conclusions
The novel GC-ICP-MS method has been shown to be suitable for the direct, simultaneous quantitative analysis (total and speciation) of ICP-detectable elements such as As and Hg present in gas and liquefied gas samples.

Detection limits in the low ppt levels were obtained for both total As and speciated As analysis without the need for a preconcentration step. The speed of the new GC-ICP-MS method (5 min per injection) makes it convenient for implementation in industrial laboratories. The fast analysis times allow the determination of contaminants to support acceptance or rejection of a stock of gas.