QuEChERS approach for the determination of pesticide residues in soil

UCT has produced an application note to evaluate the effectiveness of the QuEChERS extraction and cleanup approach for the analysis of pesticides in soil. 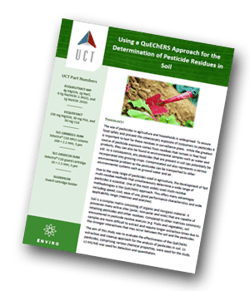 Introduction
Due to the wide range of pesticides used in agriculture, the development of fast multi-residue methods that simultaneously determine a wide range of pesticides is essential. One of the most widely used multi-residue methodologies is the QuEChERS approach. In this study, 21 pesticides, comprising various chemical properties, were used. LC-MS/MS was used for detection and quantitation.

Summary
The use of pesticides in agriculture and households is widespread. To ensure food safety and prevent the unnecessary exposure of consumers to pesticides it is important to test for these residues in surveillance plans. While the greatest source of pesticide exposure comes from residues that remain in final food products, they can also be found in environmental samples such as water and soil. As a consequence, any pesticides that are present in soil can potentially be incorporated into growing crops. Contaminated soil also represents a serious environmental problem as the pesticides can be transported to other environmental systems such as ground water and air.

Due to the wide range of pesticides used in agriculture, the development of fast multi-residue methods that simultaneously determine a wide range of pesticides is essential. One of the most widely used multi-residue methodologies is the QuEChERS approach. This offers many advantages including speed, cost, ease of use, good performance characteristics and wide applicability range (matrices and analytes).

Results/Discussion
The vast majority of pesticides included in the study could be efficiently extracted from soil using the QuEChERS approach. Neutral pesticides, in particular, could be readily extracted using acetonitrile in combination with the citrate buffered QuEChERS salts. Thiabendazole on the other hand gave low, though reproducible, recovery throughout the study. Thiabendazole is a basic compound that is positively charged at low pH and is capable of being retained on the soil through ionic interactions, particularly by humic/fulvic acids. In addition, it is a planar pesticide and could potentially be retained by strong hydrophobic interactions on the soil (e.g. similar to analyte retention on graphitized carbon black (GCB)).
In the dispersive-SPE cleanup step, using a combination of PSA/C18 yields cleaner extracts than using PSA alone and should be used whenever possible. Linearity in detector response was observed over the concentration ranges investigated with correlation coefficients (R2 values) greater than 0.99 for all 21 analytes. As outlined in the Accuracy and Precision Data table, the majority of results were found to be within an acceptable recovery range of 70-110 % and have RSD values <10 %, demonstrating that the method meets acceptable performance criteria.