How to Perform Orthogonal Chromatographic Separations by SFC

Agilent Technologies has produced a technical overview demonstrating the orthogonal separation of a mixture of pesticides using a SFC/UHPLC hybrid system including performance data of both modes. 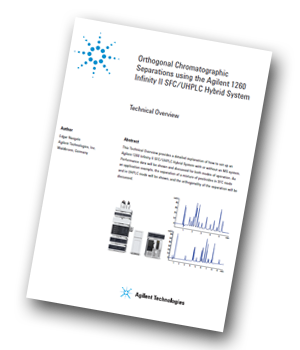 This technical overview demonstrates the performance of the Agilent 1260 Infinity II SFC/UHPLC Hybrid System in SFC and LC modes by showing retention time, area precision, and linearity data. As an example of the orthogonality of both techniques, the separation of a complex mixture of pesticides on the 1260 Infinity II SFC/UHPLC Hybrid System by means of both separation techniques will be shown and discussed.

Results and Discussion
In the SFC/UHPLC hybrid system, both separation principles are combined by dedicated and shared modules. For proof of concept, it is essential that the performance of the instrument is excellent in both modes and at the same level as for the stand-alone SFC and UHPLC instruments. To demonstrate this performance, the relative standard deviation of peak areas and retention times, and the injection linearity was measured.

Conclusion
This technical overview demonstrates that the SFC mode and the UHPLC mode of an Agilent 1260 Infinity II SFC/UHPLC Hybrid System delivers the same performance as the standalone SFC and UHPLC instruments. The values determined with the Agilent 1260 Infinity II SFC/UHPLC Hybrid System for peak area RSD, retention time RSD, and linearity are at the same levels as for the individual SFC and UHPLC instruments. The possibility of switching between SFC and UHPLC modes, even within a sequence, is demonstrated, and an example of the orthogonal separation of a complex sample is given.