This application note demonstrates the ability of the Thermo Scientific iCAP 7400 ICP-OES to perform with excellent accuracy in high concentration matrices of platinum group metals (PGM) samples where typically a radial instrument is used. 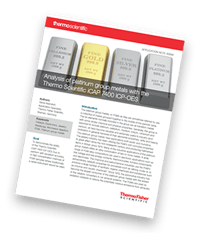 Introduction
The platinum group metals, or PGMs as they are sometimes referred to, are a collective of metals grouped together in the middle of the periodic table. The six elements normally included in the group are all transition metals with some similar chemical and physical properties. Generally, this group is assumed to include platinum, palladium, rhodium, iridium, ruthenium and osmium; all have become valuable and extremely useful to industry (and civilization in general) because of their elemental properties, rarity and beauty.
Since 1979, the automotive industry has become the largest consumer of the platinum group metals with the advent of the catalytic converters in car exhaust systems. The PGMs are used as oxidation catalysts to reduce the potentially noxious emissions from exhausts.

Instrumentation
A Thermo Scientific™ iCAP™ 7400 ICP-OES Duo equipped with a standard aqueous sample introduction
kit was used for this work.

Sample and standard preparation
The samples used for this application note are a mixture of low to mid-grade PGMs and various base metals in high concentrations. The samples have sufficiently high concentrations of PGMs so that no pre-concentration or separation was required. However, without the separation of base metals, it is necessary to use a high-resolution ICP-OES with full wavelength coverage to make sure that there are no  interferences.

Method development and analysis
The platinum group metals industry often utilizes similar wavelengths for comparison analyses between laboratories. Wavelength selection was made from a subset of wavelengths using the Fullframe capability of the Thermo Scientific™ Qtegra™ Intelligent Scientific Data Solution™ (ISDS) Software which allows a snapshot of the spectrum. The Fullframe and subarrays of the prospective element wavelengths were used to check for interferences and suitability for the analysis.

Conclusion
The iCAP 7400 ICP-OES Duo shows its versatility by analysing samples with high concentrations of base
metals while still achieving low detection limits and high accuracy. Traditionally, this application would have been performed on a radial instrument but the iCAP 7400 ICP-OES Duo has shown that it can perform excellently in high concentration matrices as well.