by Separation Science in collaboration with Agilent

This application from Agilent describes the 2D-LC analysis of complex peptones. Active solvent modulation proved to be valuable to maintain chromatographic performance and avoid breakthrough in the second dimension. 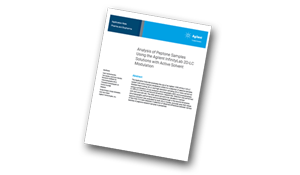 Abstract
The application note demonstrates the use of an Agilent 1290 Infinity II 2D-LC system with Active Solvent Modulation (ASM) for a selection of peptone samples. Multiple heart-cutting 2D-LC and high-resolution sampling 2D-LC were carried out using a combination of size exclusion chromatography (SEC) and reversed‑phase LC (RPLC) in the first and second dimension, respectively. Detection was performed with DAD and with MS. The ASM option proved to be valuable to maintain chromatographic performance and avoid breakthrough in the second dimension.
Injection precision was evaluated for both 2D-LC modes, and peak area RSD values of less than 5 % were obtained. A selection of observed differences between various batches of peptone research samples is presented.

Introduction
Peptones are water-soluble sources of predominantly amino acids and peptides supplemented to chemically defined growth media to support cell growth and recombinant protein production. They result from the enzymatic or chemical hydrolysis (acid) of natural products such as milk (casein), soybean, wheat, and so forth. Batch-to-batch variability associated with peptones often leads to productivity differences. Therefore, there is a clear need for analytical methods to study the molecular basis for these differences, and to determine the quality of the peptones before they are used in biopharmaceutical manufacturing.

This application note describes the analysis of different casein hydrolysates using the Agilent 1290 Infinity II 2D-LC system. SEC and RPLC are used in the first (1D) and second dimension (2D), respectively. Using multiple heart‑cutting or high‑resolution sampling, 1D cuts or snips are stored in 40 μL loops and individually transferred to the second dimension. To cope with the solvent strength incompatibility between the two dimensions (the SEC mobile phase contains 30 % acetonitrile), the 1D effluent is diluted with a weak solvent before transfer to the 2D column, a principle known as ASM.

Experimental
An Agilent 1290 Infinity II 2D-LC system equipped with the multiple heart-cutting option was used. Detection of the first-dimension SEC was done with DAD. The second-dimension RPLC was monitored by DAD or MS. Fof full experimental conditions download the application note.

Conclusion
This 2D-LC method allows a detailed analysis of complex peptone samples. Both the multiple heart-cutting 2D-LC and high-resolution sampling 2D-LC were evaluated for injection precision and sample analysis. Repetitive injections demonstrate the retention time and peak area stability in both dimensions.
The key for maintaining excellent chromatographic performance lies in the 2D-LC system with ASM that adequately focuses the transferred fraction onto the second-dimension column. This allows the high peak capacity required for this detailed analysis to be maintained